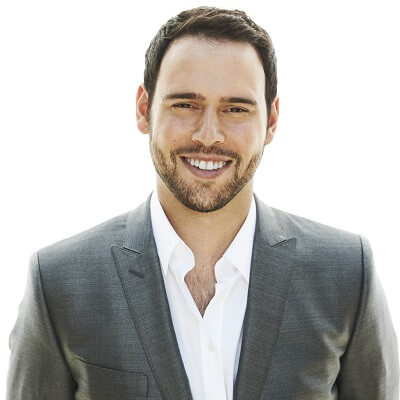 Balance in general is difficult, but I refuse to go through life and just have work and not have good balance. I want to be an example, not only to my own children but also to artists and other entrepreneurs, that you can be a workaholic and also be a good husband and good father

As a music industry, if we remain in competition, then we die. We have to understand that we're all in this together. Collaboration and synergy, it's one of the most important things out there

I had very big lips growing up, so my brother started to call me Scooter Fish because he decided a scooter fish has big lips.

What is the relationship of Scooter Braun?

Scott Braun is a divorced man.

Scooter Braun and Yael Cohen are officially divorced as updated on September 20, 2022.

He was married to Yael Cohen. Braun began dating Yael Cohen in 2013. She is a Canadian health activist and the founder of ‘Fuck Cancer’. The couple dated for a year and got married in 2014. They exchanged wedding vows on July 6, 2014, in Whistler, British Columbia.

The couple has three children from their marriage. On February 6, 2015, the couple was blessed with their first child, Jagger Joseph Braun. On November 29, 2016, Yael gave birth to their second child, Levi Magnus Braun. Similarly, Cohen gave birth to their third child and first daughter, Hart Violet on December 1, 2018.

Who is Scooter Braun?

Scooter Braun is an American entrepreneur and record executive. He is the co-founder of the comic-film studio Mythos Studios and co-owner of the esports team 100 Thieves. In 2013, Time Magazine included him on its list of 100 most influential people in the world.

His parents are Conservative Jewish and they barely escaped ‘the Holocaust’ and lived in Hungary. In 1956, they fled to America where Evrin became a dentist and Susan became an orthodontist. The couple settled in Greenwich, Connecticut after marriage.

Braun grew up with his four siblings, Adam, Sam, Liza, and Cornelio in Cos Cob, Connecticut. His brother, Adam, is the founder of ‘Pencils of Promise’, a charity organization.

Talking about his education, he attended Greenwich High School. Following that, he joined Emory University in Atlanta. He played college basketball there until his sophomore year. However, he dropped out of university without obtaining a degree after he was offered to be the head of marketing of So So Def.

How much is Scooter Braun Worth?

Scooter Braun has an estimated net worth of around $400 million. He manages some of the world’s biggest pops stars including Justin Beiber and Ariana Grande. Moreover, he has investments in Uber and Spotify. He is also the founder of  SB Projects and the co-founder of Mythos Studios.

Scooter was involved in a huge controversy with Taylor Swift in 2019. In 2019, Ithaca Holdings owned by Scooter Braun acquired Scott Borchetta’s Big Machine Label Group for $300 million. Swift made 6 albums with the Label Group and after her contract with them expired, she signed a deal with Republic Records and Universal Music Group. However, Big Machine still had ownership of her first six albums. After Taylor heard the news of Braun buying the group, she posted on Tumblr explaining how sad she is about the situation.

She also revealed that now she had to earn back her albums one by one, one for every new one she released. Moreover, she also labeled Scott a ‘manipulative bully’. Moreover, Kanye West, who was one of Braun’s clients, in the music video of ‘Famous’ showed someone like Taylor nude and said Taylor would still want to have sex with him because he made her famous.

Braun began his career as a party organizer when he was studying at Emory University. He was then hired to organize after-parties on with Anger Management Tour.

Eventually, he met Jermaine Dupri, the director of So So Def. He gave him a marketing position at his company. The following year, he got the position of the Executive director for marketing and later started his own company.

One day, he saw a YouTube video of Justin Beiber who was singing a song by Ne Yo. He contacted his mom who then allowed him to move to Atlanta to work with him. They first released videos online and later he pitched him with Usher and Justin Timberlake. Since then, Justin became a megastar and he has been his manager all this time.

He stands at a height of around 5 feet 11 inches. His weight is 80 kg. Braun has brown hair and brown eyes.

You may also like to read the Bio, Body Measurements, Career, Net Worth, and more of Dhar Mann, Chris Hughes, Ricky Van Veen, and more.