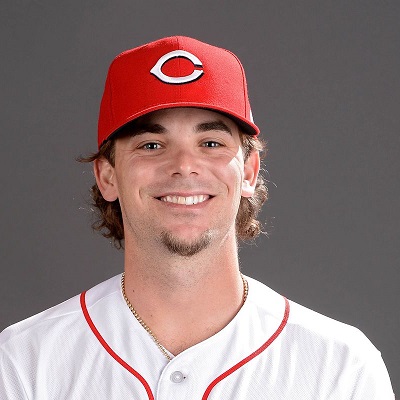 Scooter Gennett is a married person. He has been married to his longtime girlfriend Kelsey (a real estate agent) in April 2015 in a cave where there used to be a brewery. The pair met the first time as students at their high school and had begun dating since 2007. The pair got engaged in 2014.

The couple has not welcomed any children yet and is living happily with each other.

Who is Scooter Gennett?

Scooter Gennett is an American baseball player who is currently the second baseman for the Cincinnati Reds of Major League Baseball (MLB) and had played for Milwaukee Brewers.

He was born on May 1, 1990, in Cincinnati, Ohio, USA. His birth name is Ryan Joseph Gennett. He was born to father Joe Gennett and mother Tina Gennett. His father, Joe was a scout with the Astros. He has a sibling, a sister named Kristen LaRoche. The family shifted from Cincinnati to Florida so that he could play baseball year-round.

Gennett holds American citizenship but his ethnicity is unknown.

Talking about his education, he attended Sarasota High School from which he graduated in 2009.

He started his career in the year 2009 and he was drafted by the Milwaukee Brewers in the 16th round in the 2009 Major League Baseball Draft. He played for Milwaukee Brewers for the 2012 All-Star Futures Game.

On June 6, 2017, Scooter Gennett recorded-tying four home runs including a grand slam, making him the first in Reds history to hit four home runs in a game and the 17th player in MLB history.

He was nominated for the Roberto Clemente Award for his performance with the campaign K Poverty. The campaign aims to end poverty in the Dominican Republic.

He has an estimated net worth of over $5 million and he had signed a 1 year $9.775 million contract with Cincinnati Reds on January 11, 2019. This player has earned not only fame but a good fortune too from his playing career.

There was a rumor that he was out for 8-12 weeks because of a groin injury and Nick Senzel isn’t replacing him.

Scooter Gennett has a height of 5 ft. 10 inches and weighs  84 kg. Also, he has blue eyes and light brown hair.