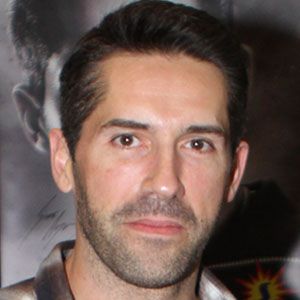 My bedroom was plastered with pictures of Van Damme. My mother was worried about me. Most teenage boys have half-naked women on their walls, and I had Jean-Claude

My first break was in a Hong Kong movie that I shot in China - I was going out there and working as a western stunt man, if you like, but at the same time in England I was working in daytime soap stuff. Eventually I put the two together

I'm like the king of the low-budget sequel. People ask, 'What film are you gonna do next?' 'I don't know, but it's probably got a 3 or 4 in the title.'

Scott is a married man. As of now, he is married to a beautiful lady named, Lisa Adkins. Scott Wife Lisa Adkin is a Sociologist. Scott shares very few information about his personal life. It might be because he doesn’t want to drag his private issues out in public.

Although we know that he is married, the date and the place of the wedding ceremony are not known.  They have children named Carmel Adkins. Currently, they live happily sharing an incredible bond between them. Till now, there is no any news of conflict between them.

Who is Scott Adkins?

Scott Adkins is a famous TV and a film actor. Additionally, he is also a famous martial artist. He is also a gymnast. Scott possesses an English citizenship. Presently, Scott is a proficient figure for his excelling action roles in several movies.

Additionally, he is most famous for his role in the martial art based action film series, “Undisputed.” He played the role of ‘Yuri Boyka’ as a prison fighter in three installments of the movie.

Scott was born as Scott Edward Adkins on June 17, 1976. His birthplace is Sutton Coldfield in the United Kingdom. The name of his father is John Adkins. Similarly, his mother’s name is Janet Adkins. Scott is of American nationality. His ethnicity is English.

Discussing his childhood, martial arts fascinated him from an early age. He started visiting local judo clubs with his father and his older brother at age 10 and continued after then. After a real-life incident of him getting mugged on a bus, he focused more on learning martial arts. At the age of 14, he started training for Taekwondo. Additionally, he learned kickboxing, Karate, Jujutsu, Judo, Wushu and other forms of fighting.

As per his education, he graduated from Birmingham Metropolitan College. While for his schooling, he attended Bishop Vesey’s Grammar School.

Afterward, he played in several other television shows like “City Central,” “Doctors,” and others. Then in 2001, he made his debut in the feature film. He featured in the action film, “The Accidental Spy.” He is best known for playing active roles in the movie. Till now, he did acting in the movies like “Pink Panther,” “Zero Dark Thirty,” “Doctor Strange,” “Ninja,” and others. Similarly, some of his TV works are “Mile High,” “Holby City,” “EastEnders,” and others.

But out of all his projects, he is popular for his role in the martial art based film series, “Undisputed.” Furthermore, he also works as a stuntman in several films.

A multi-talented personality for sure earns salaries from both of his profession. Therefore, as a result, he can accumulate a hefty amount of net worth. Currently, his net worth is estimated at around $2 million.

Scott was part of the rumor of him getting the part in Batman back in 2009. But he didn’t make to the movie. As a professional martial artist and an actor, he stays quiet in the media. Also, he avoids any public or media issue. Consequently, it keeps him away from any rumors, criticisms or controversies.

Scott is a handsome guy. He has an average height of 5 feet 10.75 inches. Also, his body weight is around 80 kg or 176 lbs. His chest is 46 inches. Similarly, his waist and arms are of 35 and 17 inches respectively. Additionally, his eye color is brown, and hair color is black.