Actor Scott Bailey is married and a mother of one.

Scott is happily married to his wife, Adrienne Frantz.

Their engagement news was announced in January 2010. And the couple married on November 11, 2011, in California. They welcomed their first child, a daughter, Amélie Irene Bailey, on December 1, 2015. 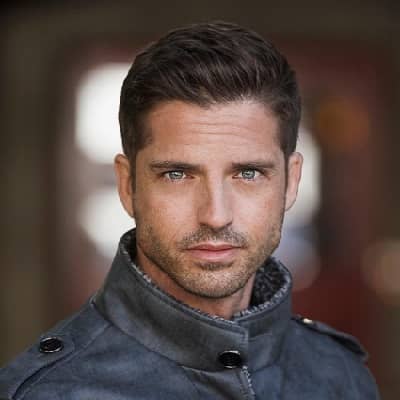 Who is Scott Bailey?

Scott Bailey is an American Soap opera and Film actor. He played the role of Sandy Foster on Guiding Light from August 2003 to 2006. Likely he has worked for various other movies and shows.

Scott Bailey was born on December 16, 1978, in Florissant, Missouri, the U.S. He grew up residing in various places like Mt. Vernon, Illinois; Augsburg, Germany; Albuquerque, New Mexico, and Los Angeles.

He has an elder sister, Lisa Bailey. His mother and sister have worked as an Army nurse for the Government. Although his parents’ names are not available.

Scott holds an American nationality and has English and Irish descent. He is fluent in German, Spanish.

He also studied at UCLA (University of California, Los Angeles) for his doctorate degree, Lateron, he decided to postpone his studies in order to pursue acting.

Scoot also worked a certain time as a mechanical engineer for the Department of Energy. And later he moved toward his interest and pursue his career in acting.

Scott began his acting debuting as Sandy Foster in Guiding Light in August 2003. He played in it until March 2006. The actor then appeared as Stan in the MTV comedy and drama series Undressed. He is also well known for portraying the role of James Trademore a.k.a. JTC, a human villain in the CW4Kids series Kamen Rider Dragon Knight.

The actor has then appeared in various television movies like Just Ask My Children (2001), Chicken Soup for the Soul, Guiding Light, Law & Order: Special Victims Unit. He was a popular TV soap opera actor.

Afterward, he started to work in movies with Universal Studios on several action shows including Terminator 2: 3D and Spiderman. He also starred in ‘The Problem’, ‘Zoo Story’ and ‘Key Exchange’ “Prayers for Bobby”, and others.

Scott has amassed a net worth of around $1 million to $5 million.

Scott is always focused on his professional work and doesn’t involve in any such work that can cause a buzz in the media. Hence, he hasn’t faced any such rumors yet.

Scott stands tall with a height of 5 feet and 9 inches. Likely, he has beautiful blue-colored eyes with dark brown hair.

You may also read the bio of Ron Bottitta, John Finn, Michael Cassidy, and Callan Potter.