Updated On November 23, 2022 | Published By: Daniel Miranda
Share this
Married 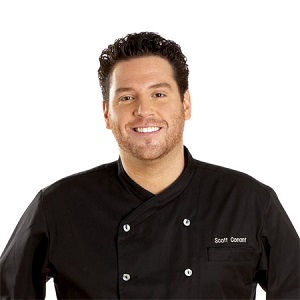 I love the artisanal approach of Amagansett Sea Salt. And no matter where I am, I can bring the spirit of the Hamptons with me.

What is the relationship of Scott Conant?

Scott Conant is married to his longtime girlfriend, Meltem Conant. After years of their love affair, the couple got married in the year 2007 in Bodrum, Turkey.

They got married in a private wedding in the presence of only family and close friends. The couple is very much in love with each other. They are blessed with two adorable daughters. The name of one daughter is Ayla Conant and the name of another daughter has not been disclosed yet.

They have been married for a decade now and they are living a happy life with their daughters.

Who is Scott Conant?

Scott Conant is an American celebrity chef, restaurateur, and cookbook author. He is best known for his three-star New York restaurants Scarpetta NY and L’Impero.

Scott previously operated a four-star Miami branch of Scarpetta. He currently appears as a judge on the Food Network’s show Chopped.

Talking about her early life, Scott Conant was born on February 19, 1971. He is of American nationality and Italian ethnicity.

There is no other information about his parents and early family life. He began cooking at a young age, taking cooking classes at the local community college at age 11.

In which school did Scott Conant attend?

When he was 15 years old, he enrolled in W.F. Kaynor Technical High School for culinary arts. After that, he attended the Culinary Institute of America (CIA).

While at the CIA, Conant interned at the famous New York City restaurant, San Domenico. After graduation, Scott Conant spent a year in Munich, Germany, mastering the art of pastry at the Hotel Bayerischer Hof.

After spending a year in Germany, Scott returned to the United States and began working as a sous chef and helping the restaurant garner three stars from The New York Times.

In 1995, Cesare Casella selected him to be chef de cuisine at Il Toscanaccio, an Upper East Side Tuscan-style restaurant. A year later, Conant went on to revamp two institutions: Barolo in SoHo and Chianti on the Upper East Side.

Scott became executive chef at City Eatery, located on the Bowery in New York City. His initial television appearances included segments of The Today Show. He was the champion of Season Three of Chopped All-Stars.

Scott Conant has published three cookbooks now. He currently appears as a judge on the Food Network’s show Chopped.

His salary is undisclosed. He has a net worth of 5 million dollars as of 2022.

Is Scott Conant involved in any rumors and controversies?

Currently, there are no desperate rumors regarding his personal and professional life. It seems he is doing the best job without harming others and has been a gentle person in his life, for which he has not been in any controversy yet.

Moving towards his body measurements, he has a good height of 5 feet 10 inches (1.78m) and his weight is 87 kg. He has Dark brown hair and eyes.

Also know more about the early life, career, net worth, relationships, and controversies of other chefs, restaurateurs, and cookbook authors like Emeril Lagasse, Debra Ponzek, Michael Symon, and Christina Tosi.