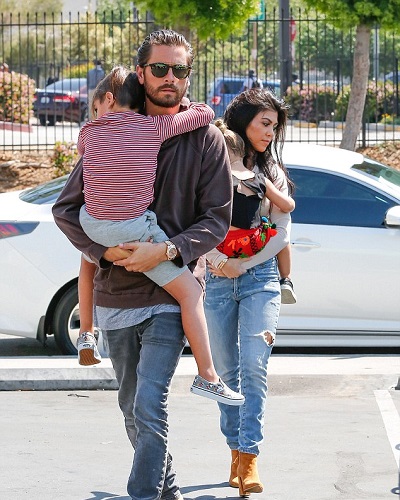 Moving on is the easy thing for many people. Just one thing can’t end all the relationship between the couple so easily. Sometimes seeing the ex getting cozy with other hurts. And when the couple together shares children, then it is quite hard to move. Former couple Kourtney Kardashian and Scott Disick are no more together. But they are co-parenting their children together.

The relationship between Kardashian and Disick is something which has been the focus of the lens from some time. Despite now the couple is no more together, but it seems Scott is jealous seeing Kourtney out with the model Younes Bendjima.

The relationship between Scott and Kourtney has been hitting the headline from a very long time. After the many news in the headlines, no doubt Kourtney didn’t want to see the name of Scott in the headline again. According to the source, during the dinner date with Younes at Santa Monica’s Giorgio Baldi April 20, she sends the text to Scott. The source revealed the text she sends saying:

“Kourtney let Scott know there might be pictures of her and Younes together,”

But the pan of the Kourtney didn’t go the right path as Scott was upset seeing them together. Moreover, the source added:

“Scott was very upset. He freaked out.”

As per the another Kardashian source, Scott is jealous of the Kourtney relationship. It seems Kardashian happiness without him really freak him out. The source said:

“Scott is jealous of Kourtney’s relationship,”

After the couple parted their ways in July 2015, Scotto started hard partier abandoned his toxic habits with one goal in mind: to win back the mother of his three kids. The couple has been co-parenting their children together while enjoying a vacation together with their children. The second source said:

“Scott’s behavior didn’t change anything for Kourtney. Kourtney says she’s not getting back together with him any time in the near future.”

According to the source, Scott is eventually falling towards his old habit. Followingly the source added:

“Scott is going out all the time now and not concealing it. He’s going to clubs and house parties, spending time with people he knows aren’t a great influence.” The message is loud and clear: “Scott is being more open about his partying because he’s realizing that getting back with Kourtney isn’t going to happen.”

Being a public figure, Scott personal life is always the focus of the camera. Recently he was spotted with his rumored girlfriend. They also enjoyed their dinner together at TAO Asian Bistro. After the split with Kourtney, there is a rumor going on that he is dating the British model Ella.

Just three days ago of the news Kourtney also stepped out in public with her boyfriend Younes Bendjima. The pair came out together on Friday, December 16, outside the SLS hotel in Beverly Hills. According to one of the insider:

“Kourtney contacted him on Friday afternoon and asked him if he wanted to meet up,”

According to the report of US Weekly, the pair is just hooking up and there is nothing serious between them. Recently, the source revealed:

“Kourtney and Younes are not serious. They are hooking up.”