Posted by MarriedBiography Posted on July 20, 2019 | In Dating , Relationship
Share this 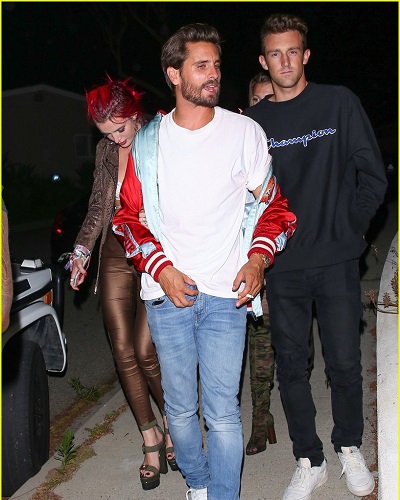 Sofia Richie, the current girlfriend of Kourtney Kardashian‘s ex Scott Disick was seen with Kylie Jenner on their tropical getaway to The Turks and Caicos Islands. They were in an all-girls’ group for the launch of Kylie Jenner‘s skincare line called Kylie Skin. And people were wondering about the closeness of Sofia to Kourtney’s sister Kylie. Additionally, they wondered whether Scott Disick has any reservations on this friendship of Sofia and Kylie.

Scott Disick and his feelings about Sofia-Kylie friendship

It seems that Scott Disick is happy with the closeness of his girlfriend Sofia Richie with Kylie, the sister of his ex Kourtney Kardashian. Also, he has no reservations on it. A source revealed:

“Scott is really happy that Sofia and Kylie have become so close again because it means that Sofia has been further accepted in the family,”

More about the closeness of Kylie Jenner and Sofia Richie

The Kardashian-Jenner clan are closely-knit. For example, when the cheating scandal of Tristan Thompson with Jordyn Woods surfaced, all of the family members were with Khloe Kardashian. Jordyn Woods was Kylie’s best friend and after this scandal, she packed her bags and moved out of Kylie’s house and life. This led to Sofia getting more close to Kylie. And they are now spending more time together and posting lovely and hot bikini pictures on their social media for their fans. Additionally, they are having the fun of their life as they show their killer bodies in matching bikinis.

Sofia, 20 had uploaded a topless picture and Kylie, 21 had opined:

The ex of Kourtney Kardashian, Scott and Sofia are now dating for nearly two years. Sofia’s father, Lionel Richie, and sister, Nicole Richie are not happy with this relationship. But Sofia is not bothered and continues with her relationship with the elderly Scott, 36. Scott has three children with Kourtney. They are Mason, 9, Penelope, 6, and Reign, 4.

He had taken to booze and sex after his breakup from Kourtney. He was with many girls around the USA and his image had taken a downslide. But now he is happy with Sofia and Kylie’s relationship and feels that it has only helped to make his relationship with Sofia stronger. The relationship has reached the point that the couple is serious and talking about engagement. They are looking at each other as, life partners.

Kourtney, 40 is also supportive of Scott’s relationship with Sofia. Sofia gets along well with Scott and their children, and Kourtney is happy on it. Their engagement does not bother her. A source said:

“Sofia is really so good with his kids and she has a good friendship and relationship with Kourtney.”