Who is the fiance of Scott Elrod?

Scott Elrod is in a happily engaged relationship with his fiancée, Vanessa Vazart.

There is no actual date on when and how they started knowing and dating each other.

Similarly, they are parents to two lovely kids. They have a first baby daughter named, Lilli but her date of birth has not been disclosed yet. 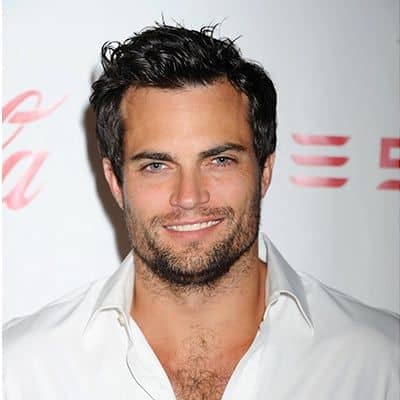 Who is Scott Elrod?

Scott Elrod is a famous American actor and former air-traffic controller. He is famous for his appearance as Cory in the Home Run and also for playing the role of Peter Musselman, in the biographical war movie, Lone Survivor.

The talented actor was born in Bitburg Germany on February 10, 1975. As of 2022, Scott Elrod is 47 years old holding German nationality. In addition, he is of Germanic nationality and has an Aquarius birth zodiac sign as per the astrological chart.

Though the name of his father and mother has not been disclosed, it is known that his father was an F-16 pilot. Getting inspired by his pilot father, he himself had a desire to be a pilot in the future.

After graduation, he got his pilot’s license and even served as an air traffic controller. He moved to the Philippines with his parents but was later brought up in Parker, Colorado, the United States.

Prior to acting, he worked as a pizza delivery and also at the Denver International airport.

Later, he started his own company with a fellow friend and was assigned as Vice President of Sales for a technology company. The actor was not satisfied with his sales success.

In 1986, he watched the movie, Top Gun which inspired him to become an actor.

In the beginning Scott Elrod made an appearance with a minor role in Paris Hilton’s music video, ‘CSI: NY, Days of Our Lives, and the Nothing In This World.’ After the following appearance, he got an offer to appear in the American comedy-drama series, ‘Men in Trees.‘ He appeared as Anne Heche’s love interest, ‘Cash.’

In 2013, he was cast as Cory Brand in the sports drama film, Home Run. The following year, Elord portrayed the role of Peter Musselman in the biographical war film, ‘Lone Survivor.’

In 2016 he starred as  Meredith’s new man in Grey’s Anatomy.  Later, he was cast as celebrity Travis Brenner in Chicago Fire on August 1, 2016.

According to Celebrity Net Worth, the actor has collected a net worth of around $5 million. Elrod’s salaries and earnings have not been disclosed yet.

Being a secretive person, the talented actor is a rumor-free personality. In addition, Scott Elrod has well-balanced in his personal as well as professional life and has maintained a very low-key profile.

Having a fit and fine body, Scott Elrod stands at the height of 6 feet 2 inches weighing around 89 Kg. The handsome actor’s body measurements like chest, waist and hip size are missing at the moment.

Moreover, with a fair complexion, he has a pair of hazel eyes and brown hair.

Being a versatile actor, Scott Elrod has huge fan followings on his social media accounts. He is present on Instagram under the username, @scottelrod having more than 13.2K followers.

Adding up more, his Twitter account is enriched with over 9.9K followers. There is also an official Facebook page under his name, that has garnered more than 19K followers.