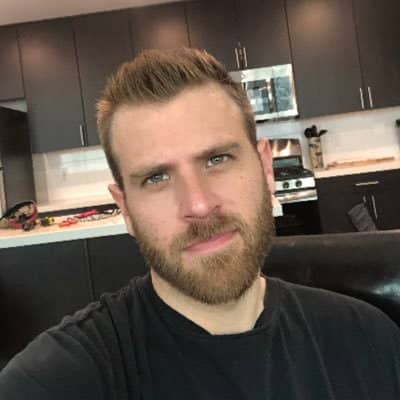 Stay focused on what is important and get involved.

Scott Evans is openly gay and is currently possibly single. He has not disclosed his relationship and affair.

Previously, he was in a relationship with Zach Volin. But after a few years of relationship, this couple split.

Who is Scott Evans?

Scott Evans is an American actor and a younger brother of actor Chris Evans. He is best known for his role as a police officer on ABC daytime soap One Life To Live.

This actor was born in 1983, September 21 in Sudbury, Massachusetts with the birth name Scott Andrew Evans.

His father’s name is Bob, a dentist, and his mother’s name is Lisa Evans, a dancer, and an artistic director at the Concord Youth Theater. He has two sisters, Carly and Shanna, and has an older brother Chris Evans.

Scott Evans started appearing in the role of a police officer ‘Oliver Fish’ on ‘One Life to Live‘ on January 15, 2008. In 2008, he eventually appeared on Guiding Light as Trey and guest-starred as Woody Sage on June 22, 2008, in Law and order: Criminal Intent.

The same year, he got the role or Ben in Fringe episode The Cure. In 2009, Evans has also seen in the film ‘Confession of Sopohohilic’ as Chad the Mail Clerk. Scott was brought back in One Life to Live for five episodes but he played 137 episodes.

Scott and Brett were out of the show in 2010 because of the storyline and religious objection to his character in One Life To Live.

Scott Evans: Salary and Net Worth

The salary of this actor is under review, we will update you as soon as we get the information. Meanwhile, According to some sources, Evans has an estimated net worth of $3 million.

There are no rumors and scandals about this star. Meanwhile, Scott has managed to keep himself out of controversies. He is doing great in his career.

Scott Evans is 6 feet tall and weighs 68 kg. He has hazel blue-colored eyes and brown hair.

You may also read about Deborah Reed, Spike Lee, and Lauren Miller Rogen.