Actor-singer Scott Grimes is married and a father of two.

Scott Grimes is a married man but his married life has been tumultuous and confusing at the moment. He is married to his Orville co-star Adrianne Palicki. The couple met first on the set of the sci-fi show The Orville in 2017.

The couple subsequently engaged less than a year after they became an official couple. Similarly, they tied the knot on May 19, 2019, but only after two months of marriage, Paliicki filed for separation.

Madison is also an actress by profession. After ten years of marriage, the couple decide to part way and got divorced in 2007. Afterward, he got married to Megan Moore in December 2011 but their married also didn’t long-lasted and separated in 2018. 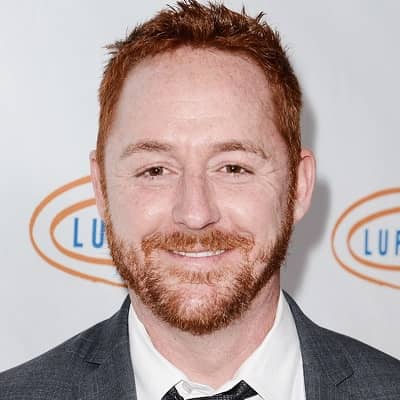 Who is Scott Grimes?

Scott Grimes is renowned as an actor and singer from the United States. He is best known for her prominent role as Dr. Archie Morris in ER and Will McCorkle in Party of Fives.

As a singer, he is known for co-writing and performing the Soft rock single, Sunset Blvd alongside Dave Harris.

Scott was born on July 9, 1971, at 3:11 PM EDT as Scott Christopher Grimes. He hails from Lowell, Massachusetts, U.S. He holds an American nationality and belongs to the Irish ethnicity.

The name of his parents is Pam Grimes (mother) and Rick Grimes (father). He has a sister named Heather Grimes who is also an actress. Similarly, his uncle Camryn Grimes is also an actor.

Scott landed his first role at the age of 13 in a made-for-TV holiday movie It Came Upon the Midnight Clear. The same year, he appeared in the TV movies, A Doctor’s Story and The Night They Saved Christmas. He made his silver screen debut in the 1986 fiction comedy horror film, Critters as Brad Brown.

A year after, he was cast on the ABC sitcom Who’s the Boss on the recurring role of Alyssa Milano’s character’s love interest, Chad McCann. He has also provided his voice for the title character of the dark animated film Pinocchio and the Emperor of the Night. Grimes starred as Will McCorkle in teen and family drama Party of Five from 1994 until 2000. From 2003 until the series ended in 2009, he portrayed the role of Archie Morrie on the NBC series ER.

Presently, he is portraying the role of Lieutenant Gordon Malloy in the fiction comedy-drama television series The Orville.

In March 1986, he performed on a Bob Hope TV special, singing “Somewhere Over The Rainbow”. Similarly, he performed as a guest vocalist on the Time album by Richard Carpenter of The Carpenters in 1987. In 1989, he released his first music album, Scott Grimes consists of two songs “I Don’t Even Mind” and “Show Me the Way to Your Heart”.

Similarly, he released his second album in 2005 titled Livin’ on the Run, and his third album titled Drive in 2010.

Scott hasn’t won any awards to date but was nominated in Young Artist Awards in several categories. Also, he has been nominated for Saturn Award as Best Performance in Critters (1986).

Scott has managed to maintain a clean profile to date. He hasn’t been part of any sorts of rumors and controversy that create a huge buzz in the media.

As of 2021, Kathleen’s net worth is estimated to be around $5 million throughout his successful career as an actor, musician, and singer. Further, his salary and other earning are still under review.

The actor has an impressive height of 5 feet 8 inches tall. Likely, his weight is about 90 kg. His chest, waist, and biceps sizes are 42, 24, and 14 inches. He has blue pair of eyes and brown hair color.