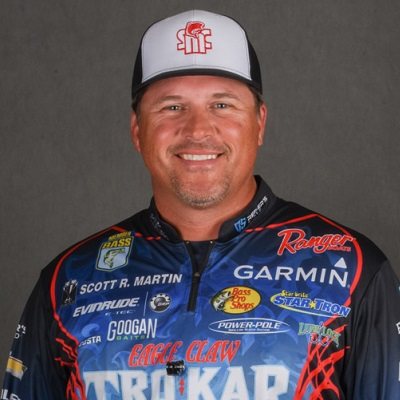 Scott Martin is a married man. He is happily married to his wife named Suzanne Martin.

Together, the couple is blessed with two sons; Reed and Jacob, and two daughters; Hilary and Amelia.

Who is Scott Martin?

Scott Martin is FLW Tour Angler of the year titled Fisherman. He is renowned as the Extreme Freshwater & Saltwater Fisherman.

Also, he is the host of the TV show, Scott Martin Challenge on the Discovery channel and Youtuber.

He is the son of the legendary fisherman, Roland Martin. Roland is also the host of the NBCSN’s TV program, Fishing with Roland Martin. Also, he has a self-titled YouTube channel, Roland Martin Outdoors with 133k subscribers with more than 10.5 million views.

As a child, he has highly influenced by his father, Roland. Due to this reason, he had a great attachment to fishing. Details on his academics are not available.

Scott Martin started his professional journey as an Angler at the age of 25. At the time, he joined the fishing tournament on the National Bass fishing trail.

In the tournament, he was able to prove himself as the hot cake in the field. Later, during the first year on his FLWTour, he earned the title Co-Angler of the year.

Moving forward, he became the won first national FLW event and got a reward of $100k. As of now, he was qualified in 5 national FLW tours making ranking him at the 2nd position on the current date.

Within his professional career as an Angler, he is decorated with titles like Tour Champions, Forrest Wood Cup Champions, and Angler of the year.

In 2005, he started hosting his own TV show, Scott Martin Challenge. The show is based on fishing. As of now, the show has completed its 11th season. Also, the show is the highest-rated outdoor program with more than 400k viewers each week.

Besides the show, he also created his self-titled YouTube channel in 2010. The channel is dedicated to catching fishes of all kinds from Monster Tuna to all types of wild fishing. Also, he shares his adventures and fishing trips through the channel.

Scott Martin has blue eyes with brunette hair. However, he prefers to wear a cap most of his time. He stands at a height of 5 feet 10 inches and weighs 88kg.

Also, he has a self-titled YouTube channel with 589k subscribers with more than 92.8 million views.

You may also read the bio of Jackson Mecham, Jawed Karim, and Ryan Johnston.