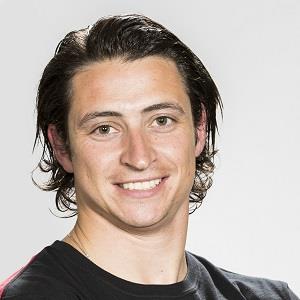 People always ask you, 'Are you like brother and sister? Are you like a married couple?' It's really original and it can't really be explained.

I would say that how we want to be remembered is by inspiring the next generation, and that goes for Canadians and anyone in the world. Hopefully ice dance has come to a new level.

What is the relationship of Scott Moir?

Scott Moir was briefly in a relationship with Canadian Skater Tessa Virtue for a brief amount of time.

In August 2019, Moir confirmed his engagement to Jaclyn Mascarin.

They planned to get married in 2020 but it was postponed due to the COVID-19 pandemic. Blissfully, the couple tied the knot on June 24, 2022.

Now, they are officially husband and wife.

Who is Scott Moir?

Moir was born in London, Canada on September 2, 1987, to parents Alma (née MacCormack) and Joe Moir. Throughout his childhood years, he was raised in Ilderton, Ontario.

Additionally, he is the younger brother of Danny Moir and Charlie Moir.

He became interested in the world of skating since his early life. He is of Canadian nationality.

Moir initially began skating with Tessa Virtue in 1997. In the 2001–02 season, Virtue/Moir won the bronze medal at the 2002 Canadian Championships at the novice level.

In addition, next year, they placed 7th at the 2003 Canadian Championships in the junior division.

Moir is the 2014 Sochi Winter Olympics silver medalist with his partner Tessa Virtue in ice dancing competitions. In addition, he is also a 2010 and 2012 World Champion.

Apart from his career in skating, Moir Virtue and co-writer Steve Milton published a book about their career called ‘Tessa and Scott: Our Journey from Childhood Dream to Gold’ in October 2010.

Furthermore, in 2013, they filmed their TV show, ‘Tessa and Scott. Moir and Virtue became the first Canadian ice dancers to win the Junior World Championships.

Additionally, he and Virtue received the first 10.0 award in international competition at 2009 Skate Canada.

Moir has not revealed his current salary. However, he has an estimated net worth of around $3 million as of 2022.

Moir and Tessa Virtue were involved in coaching controversies in 2014.

In addition, he was also involved in an ice dancing controversy in February 2014 after he and Tessa Virtue said that they at times felt like their coach was giving more attention to another pair she coaches, Americans Meryl Davis and Charlie White.

At present, there are no rumors concerning Moir’s life and career.

Talking about his body measurement, Moir has a height of 5 feet 8 inches (1.73 m). Additionally, he weighs around 75 kg. Furthermore, his hair color is dark brown and his eye color is light brown.

Facts To Know About Jonathan Scott’s Ex-Wife Kelsy Ully And Their Divorce!