Scott Porter is an actor who has been awarded for his role in the television series, The Walking Dead: The Game. Scott is married Kelsey Mayfield since 2013. They have two children.

Scott Porter is a married man. Scott tied the knot with his long-time girlfriend Kelsey Mayfield on 20th April 2013.

Prior to marriage, the couple was in five years-long relationship and engaged in January 2012. As a loving married couple, they have already welcomed two children a son McCoy Lee Porter and a daughter Clover Ash Porter.

Apart from Kelsey, Scott has never dated any girl to date. The lovebirds were spotted many times together sharing some special moments. Furthermore, they are enjoying their company and living elegantly. 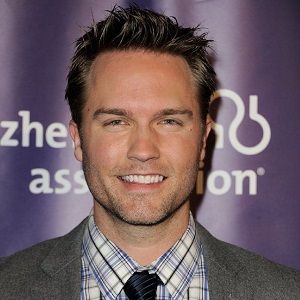 At any given time, no matter how deeply you are in love with one person, they're appealing to a very specific side of you.

The great thing about 'Friday Night Lights,' unlike so many other shows and movies, is that it doesn't take the obvious beats to pull your heartstrings or manipulate you.

I know plenty of actresses in their early thirties who look amazing, although there's that old saying: 'Ladies get older, men get more distinguished.'

Who is Scott Porter?

Scott Porter is an American actor. He came into the limelight as Jason Street in the NBC television drama Friday Night Lights.

In addition, his notable roles include George Tucker in The CW comedy-drama series Hart of Dixie, Bandslam, Dear John, The Good Guy, and a few more.

Scott was born on July 14, 1979, in Omaha, Nebraska, the United States to Butch Porter and Robin Porter.

During his childhood, he had a keen interest in football and also played at his school level. He has two siblings, Ariana Porter and Brendan Porter.

His ethnicity is German, English, and Irish.

Talking about his education, Scott joined Lake Howell High School in Winter Park, Florida. Later, he completed his graduation from the University of Central Florida.

Scott Porter began his acting career in 2004 as Matthew in the original cast of the Off-Broadway hit Altar Boyz. In 2006, he got huge recognition for his role as Jason Street in the NBC television drama Friday Night Lights. He has also worked with Alyson Michalka and Vanessa Hudgens in the 2009 film Bandslam. A year later, the American actor portrayed the role of Blake, a law firm investigator, in CBS’ legal drama The Good Wife.

In addition, he played the role of Scott Summers in the Marvel Anime: Wolverine and X-Men. Later in 2011, Scott appeared as a lawyer in the medical dramedy series Hart of Dixie alongside Rachel Bilson. As George Tucker, he appeared in the popular TV series till 2015. Furthermore, he also featured in four different television series in 2016 which include Ultimate Spider-Man, Rosewood, Scorpion, and Outcast.

As of now, he has not won any awards. However, he has been nominated for several awards in his acting career such as BTVA Video Game Voice Acting Award for The Walking Dead: The Game – Season 2 in 2013 and the Gold Derby TV Award for Friday Night Lights in 2006.

Being a popular actor, Scott earns a handsome amount of money from his profession. Currently, as per 2022’s data, he has a net worth of $3 million. Also, his salary is estimated to be $97,900 per annum.

So far, there are not any drastic rumors regarding his personal and professional life. Moreover, he has never been on the topic of controversy to date.

Scott Porter has a perfect body with a matching height of 5 ft. 11 inches and weighs 102 kg. Moreover, he has beautiful hazel blue eyes and light brown hair. However, his other body measurements are unknown.