Comedian Scott Rogowsky is low-key about his love affair. 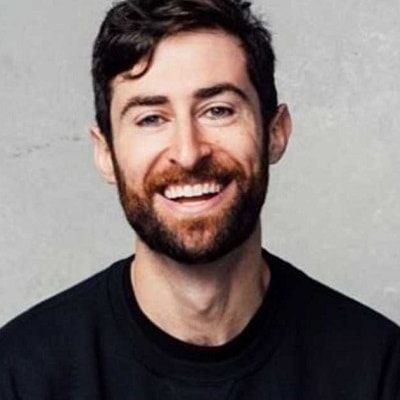 I love grocery shopping. It's one of my favorite things. I don't want to become an ordering-food-online person

I still consider myself a New Yorker before all other nouns.

Scott Rogowsky might be living his single life. He is very secretive about his personal information and has not revealed anything about his relationship and affair. He might be focusing on his career currently rather than being in a relationship.

He has a dog, Olivia the Aussie whom he treats as his child. Olivia also has an IG handle with the username @oliviatheminiaussie.

Who is Scott Rogowsky?

Scott Rogowsky is an American comedian and TV host.

He has contributed to various TV shows such as ‘Onion SportsDome’, ‘NFL Writers Room’, and ‘The Onion News Network’.

He was born on 4th December 1984, in New York City, New York, the United States of America. Scott’s birth sign is Sagittarius. His father’s name is Marty Rogowsky but his mother’s name is unknown. His parents had his upbringing in Harrison, New York.

Also, he has a married sister but her name has not been revealed. Scott is a brother of the Alpha Epsilon Pi fraternity. He enjoys baseball and is an avid fan of the New York Mets.

Scott holds American citizenship but his ethnicity is unknown.

He attended Johns Hopkins University, Baltimore, Maryland, and completed his education in political science as an undergrad. Scott discovered his comedic talents while attending the Univesity.

He came into the limelight after creating several viral videos including such as ‘10 Hours of Walking in NYC’ as a Jew and ‘Taking Fake Book Covers on the Subway’.

He worked as the host for the sports and comedy talk show called ‘12 Angry Mascots’ in 2011. Since then, he has been hosting his own show ‘Running Late with Scott Rogowsky’. The show is held at various venues around New York City and Los Angeles and it consists of guests like musicians, authors, comedians, and actors.

Moreover, Scott Rogowsky also hosted a pop-up talk show Start [email protected] in 2017 for one season. He further increased his name with the role of HQ trivia’s host in 2017.

It is an app created by tech entrepreneur Rus Yusupov which is a very popular app where players can participate at no cost and can split prize money if they can answer correctly a series of questions of increasing difficulty.

He left HQ trivia in March 2019 and many of his fans that he was fired, but the truth of the matter is he decided to leave on good terms.

Currently, Scott is hosting a weeknight Major League Baseball show, DAZN in late March 2019. The show is a sports-streaming service headed by executive chairman John Skipper who is the former head of ESPN.

It seems Scott has not been awarded and nominated for his work to date.

He has an estimated net worth of around $1.5 million and he has earned that sum of money from his professional career. Also, he earns around $30k per year as a salary. As a TV host, he might earn some amount from advertisements, deals, and endorsements.

Scott does not like to harm others and has not been involved in any rumors and controversies in his personal and professional life.

Scott Rogowsky has a height of 6 ft. 1 inch and has dark brown eyes and hair. But, his weight, shoe size, dress size, etc. are not available.