Scott Rolen is an American former professional baseball third baseman. He is married and a father of two.

Scott Rolen is happily married to Nikki Warner. They married in the year 2002 on 2nd February.

Similarly, they spend time in Indiana and Florida every offseason. Both the husband and wife are involved in charity. They work with charitable organizations. As of 2020, they are successfully married for 18 years and the family of four live together. 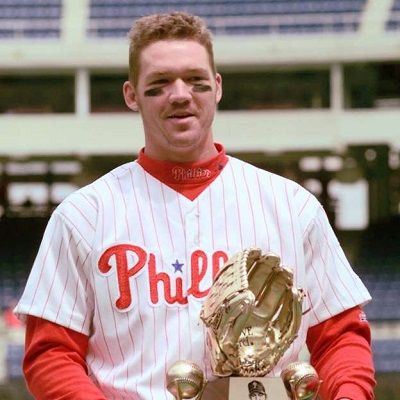 I enjoy coming to the ballpark every day. I don't go to work. I come here to play.

Who is Scott Rolen?

He was seven-time All-Star, eight-time Gold Glove winner, and the 1997 National League Rookie of the Year. Rolen was hired as Director of Player Development for Indiana University’s baseball team on 18th July 2018.

Rolen was born as Scott Bruce Rolen on April 4, 1975, Evansville, Indiana, United States. His father’s name is Ed Rolen. Likewise, his mother’s name is Linda Rolen. He has a brother and sister. His brother’s name is Todd Rolen and his sister’s name is Kristie Role.

He completed his schooling at the Jasper High School in Jasper, Indiana.

Scott was drafted by the Philadelphia Phillies in the 2nd round of the 1993 amateur draft. On 29th July 2002, Rolen and Doug Nickle were traded by Philadelphia to the St. Louis Cardinals for Placido Polanco, Mike Timlin, and Bud Smith.

Likewise, he has .281 batting average as well as a .365 on-base percentage and a .491 slugging percentage. Scott announced his retirement and did not attend the 2013 spring training.

On 18th July 2018, he was hired as the Director of Player Development for Indiana University baseball.

As of 2022, Scott has an estimated net worth of $55 million according to Celebrity Net Worth. He signed a two-year contract with Cincinnati Reds worth $13 million. He received an average salary of $6,500,000.

Scott has a house in Holmes Beach, Florida. Previously, he had a house in Huntleigh, Missouri where he lived till 2008.

There were rumors spread that the move of Scott Rolen to the Blue Jays in January 2008 was regretted by John Mozeliak. A rift between Rolen and then-manager Tony La Russa drove the deal, not because of baseball-specific reasons.

Scott has blonde hair and hazel eyes. He is 6 feet and 4 inches tall and weighs around 111 kg.