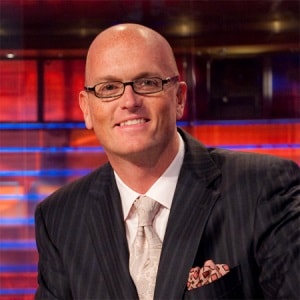 If you tried to make a show for every person's particular interest, it'd be impossible because everyone is going to consume it the way they want to. All you can do is try to do an hour that makes sense for all.

The easiest story to sell is the story we want to buy.

[In] radio, every segment of every hour is a challenge to fill in an interesting way. What I like the most about it is how challenging it is to do it well.

Scott Van Pelt is a married person. He has been married to his longtime girlfriend, Stephanie Van Pelt since October 2011, after dating for several years.

The couple has welcomed three children: Lila Catherine in 2012, Sam Van Pelt on February 17, 2016, and Charlie. The family is currently living in Farmington, Connecticut.

The pair is loyal and supportive to each other and also, there is no sign of divorce between the couple.

Who is Scott Van Pelt?

He has also worked as the co-host of SVP & Russillo on ESPN Radio.

He was born on 09 July 1966 in Brookeville, Maryland. He is currently 52 years old. Scott grew up in Washington D.C.

His father’s name was Sam Van Pelt and his mother’s name is Cathie Mathis. His father was an alcohol addict and he died from alcohol-related complications.  He has got three brothers: Mark, Mike, and Matt, and one of his brothers is in the marine corp.

Scott holds American citizenship but his ethnicity is Caucasian.

He attended Flower Valley Elementary School and Sherwood High School and achieved his degree in the field of radio/television and film from the University of Maryland in 1988.

During his time at the University of Maryland, Scott Van Pelt was an active member of the Pi Kappa Alpha fraternity. He began his carer working with WTTG-TV which is a FOX affiliate in Washington, D.C. In 1990, he left WTTG-TV and moved to the golf channel and worked there from 1994 to 2000.

He is currently hosting the nighttime solo edition of SportsCenter. Recently, he also discussed the Maryland football controversy on SportsCenter.

His show, SportsCenter is the top-rated program among young men in its time slot and it is averaging 181,000 male viewers aged 18-34 and his show is up 20 percent year-over-year among total viewers.

Talking about awards and nominations, he has not been awarded and nominated for his work to date.

He has an estimated net worth of around $16 million and he has earned that sum of money from his professional career.

Previously, his annual salary was more than $1.5 million and he is currently reported to be making $4 million per year.

He has been successful in maintaining her personality and has kept himself far from rumors and controversies.

Scott Van Pelt has a height of 6 ft. 6 inches. He has brown eyes and he is bald-headed. But, other information regarding Scott’s weight, body measurement, shoe size, dress size, are not available.

To know more about Nick Wright, Sara Orlesky, and Amy Fadool, please click on the link.