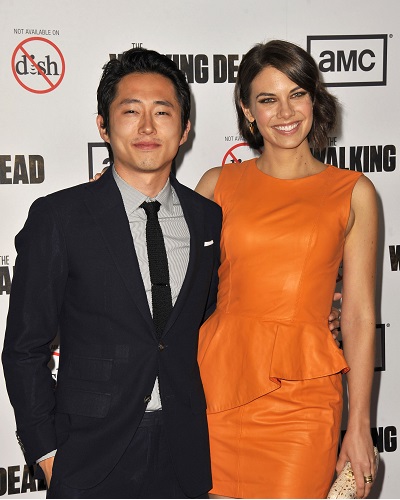 Are Lauren and Steven off-screen couples as well?

Lauren Cohan and Steven Yeun met for the first time on the sets of the series, The Walking Dead. She played the role of Maggie Greene along with her co-star Steven Yeun, who starred as Glenn Rhee. The couple was loved by the audience.

In the series, they are the love interest of each other and get married as well.

Steven and Lauren are great friends offscreen. However, they do not have an affair in real life.

In October 2013, Lauren cleared their fans who think they are dating,

“We all live within two buildings and five seconds from each other, and we all go to coffee and drinks at the same place, so we always get recognized.”

“There are entire websites dedicated to the proof that Steven and I are in a real relationship. Which is always funny, because it’s not.”

Lauren and Steven keep sharing their cute posts via their social media handle direct from the sets of the show. They are not a real-life couple, they both are enjoying their respective personal space.

In real, Steven is a married man. He is married to Joana Pak. The couple took vows in December 2016. The couple has a baby boy, Jude Malcolm Yeun in March 2017.

Lauren Cohan is currently single but once she revealed that she has a big crush on American actor Jeff Bridges. And she said:

“Jeff Bridges. It’s not a romantic crush; it’s just kind of an everything crush. I love him as an actor, I love his voice, I love his smile. OK, now it sounds romantic — but it’s not!”

Lauren will be featured in the 11th season of the series, The Walking Dead.

However, there is no confirmation that Lauren will be doing The Walking Dead season 10. According to an insider,

“We may see her at some other point this season, but I don’t want to say too much about anything.”

Is Lauren Cohan back in Supernatural‘s 3rd season?

She has shown interest that she wants to face off Winchesters in Supernatural again. She stated,

“That was my first TV experience, and my first job in the United States. It was just so much fun. It was also my first time putting a foot into the immensely strong fan base for Supernatural. It was the nicest group to become a part of. It was a first for me, for so many things. So, with absolute gusto, I would love to go back.”

Lauren Cohan is a remarkable actress and model who is known for her acting role in the renowned television series The Walking Dead. Besides, she is known for playing the recurring roles in Supernatural, Chuck, Van Wilder: The Rise of Taj, and The Vampire Diaries. More Bio…

Steven Yeun is a Korean-American actor who works in movies and TV films.  He is popular for his role as Glenn Rhee on AMC’s horror drama television series The Walking Dead (2010–2016). He is also famous for voicing the characters Keith in Voltron: Legendary Defender and Steve Palchuk in Trollhunters since 2016. More Bio…