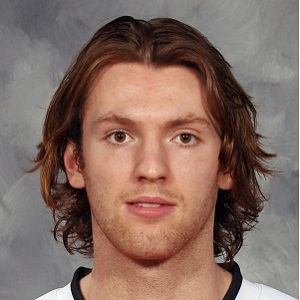 Since his personal life is a well-kept secret, nothing is known regarding his relationship history and status till present. He, thus, is presumed to be enjoying his single life. However, it has to be kept in mind that being a good player, he may have some crush from his female fans.

Who is Sean Couturier?

Sean Couturier is a Canadian-American professional ice hockey player. Currently, he is playing for the Philadelphia Flyers of the National Hockey League (NHL).

Couturier was born Sean Gerald Couturier on December 7, 1992, in Phoenix, Arizona. His nationality is Canadian-American and ethnicity is North American.

His father, Sylvain Couturier, was playing for the International Hockey League (IHL)’s Phoenix Roadrunners. His mother’s name is Isabelle Morrier.

There is no information on Sean’s educational background.

Couturier started his career in the 2005-06 season with Chaleur Lightning Bantam AAA in NBBAAAHL. He played with Miramichi Rivermen Midget AAA in NBPEIMMHL the next season, followed by Notre Dame Hounds Midget AAA in SMHL.

Drummondville had the second overall pick in the 2008 QMJHL Entry Draft and picked Couturier. Couturier joined Drummondville for the 2008–09 season and helped the team win their first President’s Cup as QMJHL champions.

In 2009–10, Couturier stepped forward to lead the QMJHL in points. In the 2010 playoffs, Drummondville advanced to the semi-finals before being eliminated by the eventual champions, the Moncton Wildcats. Couturier was third on his team in points for the playoffs, behind Dumont and Chris DiDomenico.

In 2010–11, Couturier had a bout with mononucleosis over the off-season. Despite this setback, Couturier once again had an impressive year. In the playoffs, Drummondville advanced to the second round, before being eliminated in seven games by the Gatineau Olympiques. Couturier finished the playoffs with 11 points in 10 games.

His 2010–11 campaign resulted in him being named to the QMHJL First All-Star team, as well as winning the Michel Brière Memorial Trophy as the league MVP and the Mike Bossy Trophy as the best professional prospect in the QMJHL.

Couturier was drafted eighth overall by the Philadelphia Flyers in the 2011 NHL Entry Draft. He signed a three-year, entry-level contract on September 21, 2011.

Couturier made an impression in training camp and started the 2011–12 season with the Flyers. He earned his first point in the NHL in his third game on October 12 against the Vancouver Canucks. Couturier scored his first NHL goal in his fifth game on October 18, 2011, against the Ottawa Senators. He was one of the youngest players to participate in the NHL All-Star Game festivities, named on the rookie team and participating in the skills competition.

During the Flyers’ opening-round playoff series against the Pittsburgh Penguins, Couturier was tasked with shutting down Art Ross Trophy winner Evgeni Malkin. Couturier earned much praise for his play, holding Malkin to one even-strength point while Couturier was on the ice during the series, and also scoring his first career hat-trick, becoming the second-youngest player to score a hat-trick in a playoff game, and adding an assist in a four-point performance during game two of the series. Teammate Jaromír Jágr compared Couturier to Hockey Hall of Famer Ron Francis.

During his third QMJHL season, Couturier was invited to take part in the Canadian National Junior Team’s selection camp in December 2010. Couturier was named to the team for the 2011 World Junior Championships, held in Buffalo, New York, as Canada’s only NHL draft-eligible player. He played for Canada’s gold medal-winning team at the 2015 World Championships, where they won the title for the first time since 2007.

Sean Couturier: Salary and Net Worth

Couturier has not been dragged into much greater controversies or rumors. He, however, has been dragged into rumors regarding his injury. He has, thus far, managed to keep a clean image in the eyes of public and fans.

Sean has a height of 6 feet 3 inches. His body weighs 89kg. He has light brown hair and brown eyes.