Sean Hayes is a famous American comedian, actor, and producer. Sean is married to Scott Icenogle.

Sean Hayes is gay and tied a lifelong knot with a long-term partner of eight years, Scott Icenogle. The couple married in November 2014. Currently, they are happy and living peacefully together. They are appreciated by the fans. The love birds have been together for many years. 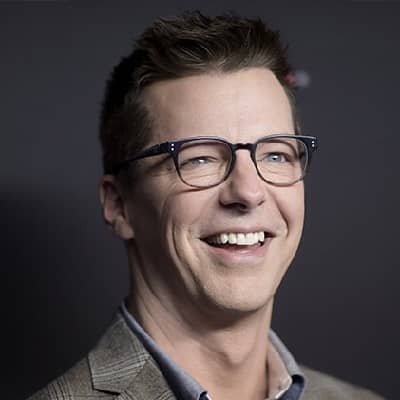 When I came out of my mom's womb, I had 'sitcom' stamped on my forehead.

Through that, I got to know Jerry's work, and I am definitely his number-one fan right now, which is interesting because it usually works the other way around: you usually create a project based on your hero.

No one could have ever dreamed about how well the show would do.

Who is Sean Hayes?

Sean Hayes is a famous American comedian, actor, and producer renowned for his contribution to the NBC sitcom Will & Grace. Moreover, he is also popular for his broadway roles, Tv Films, and Television appearances.

Sean is the younger of five children of Mary Hayes and Ronald Hayes. His mother Mary was the director of a non-profit food bank, Northern Illinois Food Bank, and his father was a Lithographer. Sadly, his father was an alcoholic and left the family when Sean was 5 years old. Therefore, Sean and his siblings were brought up by his mother, Mary Hayes.

His siblings’ names are Dennis Hayes, Tracey Hayes, Kevin Hayes, and Michael Hayes. Moreover, he was from a Roman Catholic family who grew up in the Chicago suburb of Glen Ellyn, Illinois. Unfortunately, he lost his loving mother in the year 2018.

He is from Irish ethnic background and holds the citizenship of America.

Sean graduated from Glenbard West High School and later attended Illinois State University to study piano performance. After that, he moved to Los Angeles in 1995 to become a successful actor. Likewise, he was engaged in many acting programs in the way of his educational career which provided him an opportunity to sharpen his skills and knowledge. Moreover, he obtained his honorary Ph.D. from Illinois State University in February 2013.

Sean Hayes started his career as a classical pianist and composed original music for a production of Antigone at the Steppenwolf Theatre Company situated in Chicago. After moving to Los Angeles in 1995, he became a stand-up comedian and also did a commercial for Doritos which aired during Super Bowl XXXII in the year 1998.

At the age of 28, he made his professional debut in the independent film Billy’s Hollywood Screen Kiss (1998). Later, he performed many roles as an actor. He starred as Jack McFarland in the NBC sitcom Will & Grace which was highly rated. Will & Grace won him a Primetime Emmy Award, four SAG Awards, and one American Comedy Award, and earned six Golden Globe nominations.

Then, in 2002 he got the role in the biographical film, Martin and Lewis as Jerry Lewis. In 2011, he produced a drama television series, Grimm, and also produced the sitcom, The Soul Man in the next year. In 2013, he appeared in the sitcom television series Sean Saves the World. Hayes has also appeared on a couple of theatres acts like Damn Yankees, Promises, Promises, and An Act of God.

Sean’s net worth is estimated to be $20 Million as of 2022, and earns a hefty amount of money from his appearance in the movies and television.

Before he announced that he is gay, there was major confusion among the fans for several years believing he is gay. Anyway, he opened about his sexual orientation in a 2010 interview with The Advocate.

Sean stands at a height of 5 feet 11 inches with a weight of around 72 kg. Similarly, his hair color is blue and his eye color is dark brown. He always wears a smile on his face.