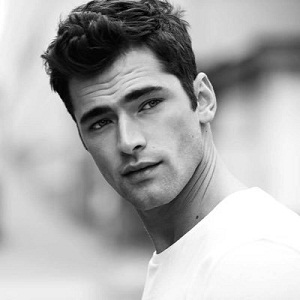 Sean O’Pry at present is in a relationship. He is dating a model Samantha Marie Gradoville.

The couple lives together and owns a pet dog, Tallulah Von Ruffworth (a Golden Retriever).

From 2009 to 2012, Sean was in a relationship with the Romanian model, Diana Moldovan.

He later dated the Chinese model, Ming Xi, for a year in 2012, but their relationship ended in 2013.

Sean then dated Jessica McNamee in 2014.

Who is Sean O’Pry?

Sean O’Pry is a successful American male supermodel. He has been on the cover page of ‘Vogue’ and ‘GQ’.

He was born Sean Richard O’Pry on July 5, 1989, in Kennesaw Georgia, USA. He holds an ethnicity of Irish-American.

Sean O’Pry turned towards modeling as a career when his prom pictures were discovered by Nole Marin, founder, and owner of ‘AIM Model Management’. With the support of a righteous hand assisting him, Sean’s journey has been on the right track ever since.

He has been the lead face of several brands. Some of them are ‘Calvin Klein’, ‘Giorgio Armani’, ‘Versace’, ‘Dolce & Gabbana’. ‘H&M’, ‘Marc Jacobs’, ‘American Eagle’, ‘Ralph Lauren’, and more.

Models.com ranked him first amongst the ‘Top 50’ most successful male models in 2015. Sean was rated fifth on Vogue’s list of all-time best male models.

O’Pry was seen in Madonna‘s music video Girl Gone Wild in the year 2012. The song was from her album MDNA.

He also appeared in Blank Space in the year 2014. This song was from Taylor Swift‘s album 1989.

The estimated net worth of this model is around $8 million. His annual earning is estimated at around $1.5 million.

This popular male model has surely managed to stay away from controversies. There are no rumors of him related to his professional and personal life.

His chest, biceps, and waist measure 38 inches, 15 inches, and 30 inches respectively. His hair is in dark brown color and his eye color is hazel.