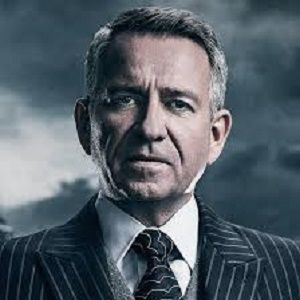 [on Peter Capaldi] My father was very fond of Peter and Peter is an extremely lovely gentleman. He was very kind to my family when my father passed away, he was a big fan of my dad's actually. So personally the Pertwee household was absolutely delighted when he got the role of The Doctor. I think he's going to bring some real gravitas and weight, which only comes with age. Taking nothing away from Matt [Matt Smith], who I thought was great, I just think he's going to stupendous. He's going to have a completely different look. He's such a phenomenal actor anyway I think he'll be absolutely brilliant. I'm delighted he's doing it.

Who is Sean Pertwee married to?

Sean Pertwee is married to a make-up artist, Jacqui Hamilton-Smith who is the daughter of Anthony Hamilton-Smith, a peer, dentist, and politician.

Around Christmas of 2001, Jacqui gave birth to twins, Gilbert & Alfred.

However, his son Gilbert expired four days later because of premature birth.

From approximately eighteen years the couple has been in the relationship and till now, there is no rumor about their involvement in any other affairs.

Who is Sean Pertwee?

Sean Pertwee is a popular voice actor and English actor.

He is popular for the role of Captain Fitzpatrick in the play Tom Jones, Sergeant Wells in Dog Soldiers, Pilot Smith in Event Horizon, Inspector Lestrade in CBS’s Elementary, and Alfred Pennyworth in Fox’s Gotham.

He is the son of Jon Pertwee,  a comedy actor known for his starring roles in Doctor Who, Worzel Gummidge, and the German second wife Ingeborg Rhoesa.

Since his early childhood, he had an interest in acting.

He was educated at Teddington School. After that, he attended  Sunbury College.

After graduating from  Sunbury College, he left his education to become an actor.

He started his career in the play Tom Jones he was cast as Captain Fitzpatrick, based on the novel by Henry Fielding.

He portrayed Brutus in the Hallmark Channel film Cleopatra in 1999.

Then after he co-owned the Natural Nylon film production company along with Sadie Frost, Jude Law, Jonny Lee Miller, and Ewan McGregor and the company folded in 2003.

He is the voice behind some documentaries and video games, including the medieval empire-building computer game Medieval: Total War and futuristic war games Killzone, Killzone 2, and Fire Warrior.

Moreover, on  7 November 2011, he was the narrator of Masterchef: The Professionals, replacing India Fisher for the fourth series.

Besides that, he also appeared in the film Devil’s Playground, a zombie horror film directed by Mark McQueen and released in  October 2010. He has worked in several dramas for BBC Radio 4.

As well as Pertwee was cast in Fox’s TV series Gotham in 2014, a series presenting an origin for the characters of the Batman franchise.

Till now he has not been any part of the controversy and rumor.

He is maintaining his personal and professional life properly.

As well he has been keeping most of his records far from the media.

Sean Pertwee: Salary and Net worth

He earns a  decent amount of money from his successful professions but has not disclosed to the media or public.

As of 2022, his estimated net worth is about  $5 million which he earns from his professions.

Besides that, he is 6′ feet tall with unknown body mass.