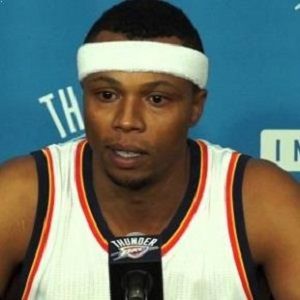 Tonight getting out there on the floor, I felt more comfortable. The shots were just falling for me. It felt good to get in a rhythm

Damon [Stoudamire] gave me advice of things I need to do to get through the whole season. The main thing is taking care of my body. I have to treat my body like a machine. What you put in it is what you'll get out of it

I'm happy to come home and have a chance to play in the Garden and play against my cousin and have our families come out and watch us play on the same court.

Reflecting on a personal life of Sabastian Telfair, he is married. He is married to his longtime girlfriend Samantha Rodriguez.

The couple has two children, a son, and a daughter. His son’s name is Sebastian Telfair Jr. and daughter’s name is Samaya Telfair.

Who is Sebastian Telfair?

Tall and handsome Sebastian Telfair is a well-known American professional basketball player. He is best known as the player for Fujian Sturgeons wearing a jersey number 38. He often plays a point guard position.

American professional basketball player Sebastian Telfair was born in Brooklyn, New York on 9 June 1985. He is of African American ethnicity and has an American nationality.

He is the son of Erica Telfair(mother) and Otis Telfair(father). He has a brother named Ethan Telfair.

Since childhood, he had built up a strong interest towards basketball.


He studied at Abraham Lincoln High School where he was considered as a five-star recruit by Rivals.com. He had planned to join the University of Louisville but decided to join NBA directly.

Telfair signed a one-year contract with the Chinese team Tianjin Ronggang of the Chinese Basketball Association in October 2013. On 15 July 2014, he returned back to NBA signing with Oklahoma City Thunder but soon released from the team on 26 November 2014. On 2 December 2014, he joined Xinjiang Flying Tigers for the rest of 2014-15 CBA season. Then he joined Fujian Sturgeons in 2016 and since then he has been playing from there.

Except for trade rumor, Telfair has not been in other rumor and controversy sufferings in his life.

Sebastian has the height of 6 feet. His body weighs 79kg. He has black hair and black eyes. Furthermore, there are no details about his body measurements.