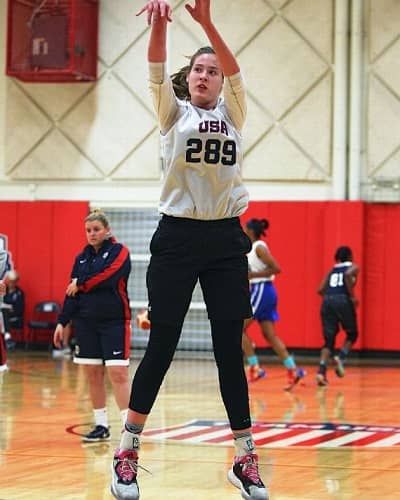 Sedona Prince has spoken about the inequality at NCAA Basketball Tournament. Sedona’s video went viral recently where she pointed out gender discrimination.

The University of Oregon player compared the weight room in Indianapolis to that in Texas. For the men in sports, they have a huge well-equipped gym while women are given a single stack of dumbbells and yoga mats.

it’s 2021 and we are still fighting for bits and pieces of equality. #ncaa #inequality #fightforchange

Since the video, NCAA apologized and promised to provide a new well-equipped room. Sedona thanked NCAA for listening to the women and providing them with a new weight room.

Also read Who is Blair Bashen? Insight on her engagement with NBA player Danny Green, net worth, Instagram, biography

What is the age of Sedona Prince?

Sedona Prince was born on 12th May 2000 in Hemet, California. She is 20 years old at present. She is the daughter of James Prince and Tambra Prince. Her mother played basketball and volleyball at St. John’s College in Kansas. Her father served in the Marine Corps.

Similarly, she has a brother named Diego. Her brother also appears on her TikTok. Sedona attended Liberty Hill High School. When she was in high school, Prince was picked for the McDonald’s All-American team during her senior year. Also, she landed on the roster of the U.S. under-18 national team.

During the early game of the FIBA U-18 Americas Women’s Championship tournament, her foot came down her opponent’s sneaker. She recalls the moment her coach was trying to make her feel good. She recalls,

“I just remember looking up at him and saying, ‘There goes my freshman year’. It didn’t feel real because it happened so fast. I knew it was really, really bad. But I didn’t know it would turn into this.”

Sedona Prince has an Instagram account with 54.1k followers and has made around 40 posts. Her first post was on 12th February 2018. It was a picture of her at the University of Texas At Austin. She has posted multiple posts of her with her basketball mates.

Talking about her Twitter, she has 26.8k followers. She joined Twitter in December 2015. Her TikTok account has 668.6k followers and has gained 31.4 million likes. Her TikTok videos get millions of views and likes. She makes videos of her basketball days and dance videos.