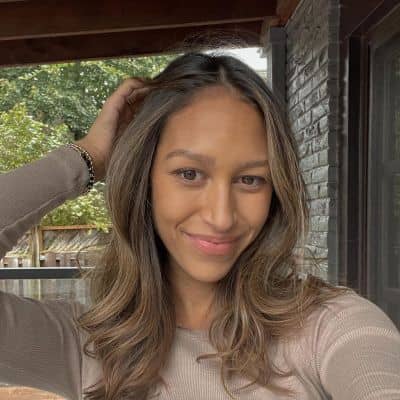 Talking about her relationship details, Serena Pitt is engaged to Joe Amabile who is a reality star. The couple engaged during the finale of Bachelor in Paradise season 7.

Moreover, the return of Joe’s ex-girlfriend Kendall Long did not affect their relationship and got the blessing instead. Amabile got down on one knee and romantically proposed to her.

Other than that, Serena has been secretive towards her relationship details and related news.

Who is Serena Pitt?

Serena Pitt is a well-recognized Canadian actress, model, and reality star. Pitt is widely famed for appearing as the women contestant for Bachelor Matt James.

Moreover, she won the 7th season of Bachelor in Paradise.

Serena Pitt was born on 25 October 1997. At present, she is 24 years young star. Likewise, her birthplace is Toronto, Canada.

Serena is the daughter of her father, Bill Pitt whereas her mother is Rasna Pitt. Moreover, she has a sister named Talia.

Talking about her nationality, Pitt holds a Canadian identity whereas her ethnicity is Canadian-Asian.

Regarding education, the star completed her high school education and then attended Laurier University in Canada. She completed her bachelor’s degree in Communication Studies and Business Management in 2019.

Pitt has also minored in psychology along with her primary degree and then joined George Brown University for her postgraduate in 2020.

Initially, Serena started her career as a dance instructor in Vlad’s dance company where she worked till 2016 and then became part of Colliers International as a data associate from May 2016 to August 2016.

Moreover, Pitt worked as a Multi-sport camp counselor and campus ambassador. She has also worked as a Swimming Instructor at Superfine Aquatics and became an intern at a local life magazine. The star also became a brand ambassador at Cotton candy Event Staffing.

Serena is one of the youngest contestants to join the 25th season of the American series-The Bachelor which premiered in January 2021. Earlier she appeared in The Bachelor Paradise where she mentioned she would be looking for genuine connection and chemistry.

Pitt in advance had gained good attention from the show in the series but she quit at the 8th episode when she fell in love with Matt James, who was then the bachelor in the front. But the star ended her story with James after a heart-to-heart with her mom that made her realize she didn’t truly love James.

Presently, Serena is working as an Intern at MacIntyre Communication.

A Canadian star, Pitt has earned a handsome amount of money from her profession. She lives a lavish lifestyle along with her family.

It is reported that Serena Pitt has an estimated net worth of $100k-$500k.

Serena has never been part of any controversial matter or rumors till now. The star has been preoccupied with her professional and private life.

It seems that Pitt prefers enjoying her personal life and does not want to merge it with her professional life.

24 years young star, Serena has beautiful looks and an admirable personality. She stands at a height of 5feet 6inches. Also, she has a balanced body weight of 60 kg.

Furthermore, Pitt has brown eyes whereas her hair is brown.

Regarding her social media presence, Serena Pitt is an active personality on social media. Serena has more than 688k followers on her official Instagram account @serena_pitt.

She is also active on Twitter with around 13.6k followers.

Joe Amabile and Serena Pitt still on honeymoon phase! Who is Serena Pitt?