Sergio Busquets is not married yet but he is in a relationship with a girl named Elena Galera. Prior to meeting her romantic partner, Elena worked as a nursing assistant. As of now, she is an internet sensation and more popular on Instagram.

The couple started dating back in the year 2014 and they have been together ever since then. The pair is blessed parents of two sons. On March 8, 2016, the duo welcome their first child named Enzo Busquets. Likewise, they welcome their second child named Levi Busquets on September 19, 2018.

Previously, he has been in a relationship with Vanessa Aguilera. The couple dated for several years however the details about their love life are under the curtains at the moment. 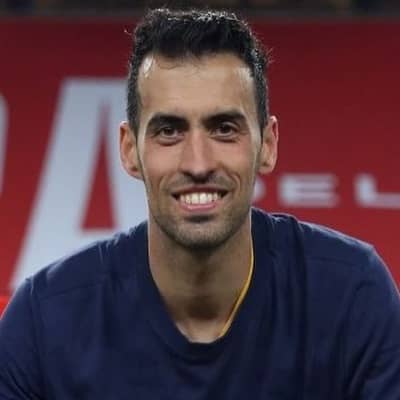 Who is Sergio Busquets?

Sergio Busquets is a Spanish professional football player. Busquets currently plays as a defensive midfielder for both Barcelona FC and the Spanish national team. He has been part of the squads that won a treble of La Liga, Copa del Rey, UEFA Championship League 2008/09 and 2014/15.

He included in Luis Enrique’s 24-man squad for UEFA Euro 2020 as a captain in the absence of Sergio Ramos. However, eight days before Spain’s first game he tested positive for COVID-19 and still does not have sight of recovery. Currently, Jordi Alba has been handling the captaincy position.

Sergio was born on July 16, 1988, as Sergio Busquets Burgos. He hails from Sabadell, Barcelona, and Catalonia. He grew up in a second-generation footballing family.

Sergio’s father Carles Busquets was a former goalkeeper of Barcelona. His mother’s name is Loli Burgos. He has also a brother named Aitor Busquets.

Talking about nationality, he holds Spanish citizenship and belongs to the Caucasian ethnicity.

In the season 2007/08 Tercera Division, he made his debut in a team as a substitute in the Copa Catalunya match. On September 13, 2008, he made his La Liga debut, featuring 90 minutes against Racing de Santander. Similarly, he was part of the team in the 2008/09 UEFA Champions League. Busquets signed a contract extension with FC Barcelona on December 22, 2008, with a buy-out clause of around $95 million until 2013.

Also in 2008, Busquets made his debut at the international level for Spain’s Under-21team during the 2009 UEFA European Under-21 Football Championship qualification play-offs in the first leg match against Switzerland. Then he was called up to the senior squad for the friendly against England in 2009. He eventually made his debut in a 2010 FIFA World Cup qualifier against Turkey on April 1, 2009, playing 16 minutes in a 2–1 win in Istanbul after replacing David Silva.

On November 16, 2016, he got a captained position for the first time in the absence of a regular captain Sergio Ramos during a friendly match against England at the Wembley Stadium. He is a one-club man player who is still playing for Barcelona since July 2008 and made over a total of 600 appearances to date.

Sergio was part of a controversy when he allegedly mocked Real Madrid’s Marcelo Vieira by calling a monkey during the first leg of the 2011 UEFA Champions League semifinals.

As of 2022, Marcos has an estimated net worth of around $45 million throughout his successful career as a football player. His weekly wage is above $3 million and his annual income is estimated to be around $19 million per year playing for Barcelona.

The player has an athletic body posture. He has an impressive height of 6 feet 2 inches tall and weighs around 77 kg. Likely, his chest, waist, and biceps sizes are 40, 34, and 13.5 inches. He has dark brown hair color with light brown pair of eyes.

On his left inner arm, he has a tattoo with an Arabic phrase that means “A thing for you, the life in my country”. He dedicates his tattoo to his maternal grandfather to whom both were very close before her death.