Sergio Calderon is a singer, songwriter, multi-instrumentalist, and musician. After being crowned as one of the winners of ABC’s reality competition TV series ‘Boy Band’ in 2017, he became a member of the pop group In Real Life.

Sergio is single at the moment. He hasn’t been engaged in any relationship.

The singer may not like sharing his personal information in the media. And so no information is known regarding his love life.

Sergio was in a relationship with Angela Galdamez. They started dating in the year 2015 and get separated in 2018. 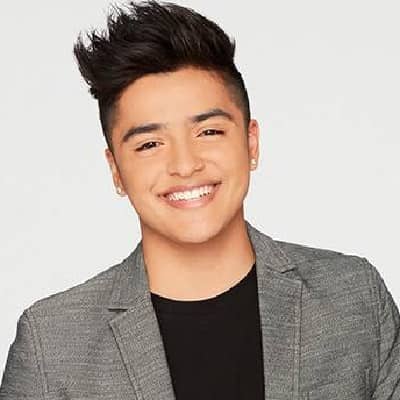 Am I thinking of getting Gucci flops. Nah, dude. I'm not one of those guys. I won't get them. Actually, you never know, I might - I'm probably saying that right now and might get them some time but I don't know. So I don't know.

Shakespeare is undoubtedly one of the greatest writers of English - no he's not!

Who is Sergio Calderon?

Sergio Calderon is a singer, songwriter, multi-instrumentalist, and musician. After being crowned as one of the winners of ABC’s reality competition TV series ‘Boy Band’ in 2017, he became a member of the pop group In Real Life.

He was born on October 06, 2000, in Redwood City, California, United States. Calderon’s ancestry is Mexican and he belongs to nationality.

His father’s name is Sergio Calderon Sr. and likely, his mother’s name is Josefina Calderon. Both of his parents own and work in the cleaning business.

Sergio attended the Woodside Priory School in Redwood City, California. He graduated in the year 2018 along with his twin brother. During his school days, he was interested in soccer and used to play as a midfielder. Additionally, he was also the team captain.

In 2016 he set aside his dream of being a soccer player and focused his career on music. He gets inspired t get into music by watching a One Direction video.

Sergio created his YouTube channel on November 4, 2014. It received a lackluster response. And later, he opened his second channel on March 21, 2016. He started uploading videos four days later. At that time, Calderon was regularly performing on Theatre Way in downtown Redwood City.

The singer was a contestant in a singing competition The Voice. He gained popularity after participating in ABC’s music competition series Boy Band. It was its first season aired from June 22, 2017, to August 24, 2017. Backstreet Boys’ Nick Carter, the Spice Girls’ Emma Bunton, and Timbaland were the three panel of judges. Sergio performed a Spanglish version of Prince Royce’s single, Stand By Me in his audition.

The salary of a musician is about $52,300 per year. So building his career in the music industry he must have good earnings.

During the final episode of the Boy Band show, there were different criticism saying that there was a lack of diversity in “The Real Life’. Also, many of them complained that it was biased and no African American was selected among the final five.

Likely talking about his appearance, he has black-colored hair with dark brown eyes. He also has different tattoos on his hand. He has a cross sign on his left forearm likely, a redwood tree on his left arm. Furthermore, he also has a roman numeral ‘XV’ on his arm.

You may also read about Ellie Thumann, Megan Amram, and Caleb Lee Hutchinson.