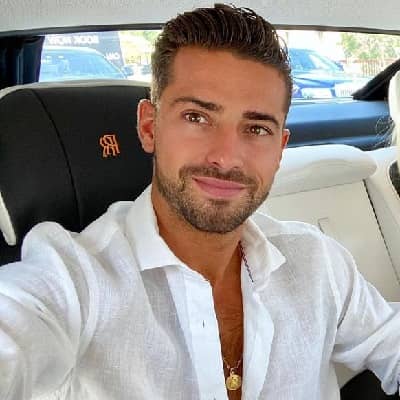 Sergio José Carrallo Pendás is currently engaged. Recently in early Jan 2021, he proposed to his girlfriend Caroline Stanbury which he uploaded on his Instagram account.

This proposal was unique as Sergio Caroline Stanbury got down on one knee in the holy lake of Nepal’s Gosaikunda. It is 5400m above sea level and is surrounded by beautiful mountains.

His fiance, Caroline has three children from her past marriage. Their names are Yasmine Habib, Aaron Habib, and Zac Habib.

Who is Sergio Carrallo?

Sergio Carrallo is a Spanish football player. He plays in a Left Winger position and recently played for a team named NY Cosmos B.

He was born as Sergio José Carrallo Pendás on 28 Sep 1994 in Madrid, Spain. His ethnic background is Spanish.

The name of his father unknown and his mother’s identity is also not disclosed. Moreover, he studied at the University of California and Universidad Europea de Madrid.

Sergio Carrallo started his career in July 2013 with team Real Madrid C. With them he played for almost two years and left in Jan 2015 then joined UB Conquense.

The net worth of his Fiancee, Caroline is around $30 million. She also owns a bridal boutique named The Wedding Shop.

The worth of three popular soccer players are,

This sportsperson is not surrounded by any desperate rumors or scandals.

But as per the reports, Sergio was offered money to dump his girlfriend. This offer was given by non-other than Caroline’s father.

Sergio and Caroline have an age difference of 18 years, so when his mother found out about this affair, she cried.

Regarding Sergio Carrallo’s body features, his height is 5 ft 11 inches and his body weight is 78kg. Moreover, the color of his eyes is brown plus his hair is also brown in color.