Serj Tankian is a married man. He married his long-time girlfriend Angela Madatyan on June 9, 2012. The wedding ceremony took place in Simi Valley, California. The pair had their first child, a son named Rumi on October 24, 2014. Tankian’s marriage is going strong as there is no news regarding any extramarital affairs at present. 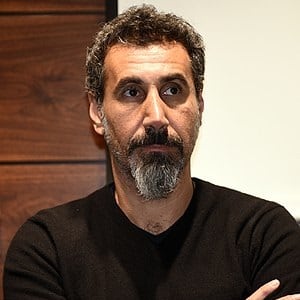 Awareness in our society has flipped all types of injustice on its head.

Civilization is a failure. We need to think what we can do together in love and peace.

People think our music's very aggressive or angry or whatever, and it's just the opposite, really... I like laughing. And I like being really calm before a show, and smiley.

As an artist, you never want to write the same song again, you always want to challenge yourself to writing in a different way.

As long as people are living their truth or their vision, whether they're activists or not, that's the important thing.

Who is Serj Tankian?

Serj Tankian is an Armenian-American singer, musician, songwriter, and record producer. People mostly recognize him as the lead vocalist, songwriter of the alternative metal band ‘System of a Down’. To date, the band has released five albums. Additionally, Tankian has also released five solo albums.

Tankian was born in Beirut, Lebanon on August 21, 1967. He was born to parents Khatchadour and Alice Tankian. He became interested in the world of music since his childhood years. Additionally, he holds American, Lebanese, and New Zealand nationality. Furthermore, he belongs to the Armenian ethnic background.

Talking about his education, Tankian attended bilingual Rose and Alex Pilibos Armenian School. In addition, he was later accepted into California State University.

Tankian initially formed the band ‘Soil’. Later, after the band members left the band, he formed a new band ‘System of a Down’ alongside Daron Malakian and Shavo Odadjian. Additionally, among the band’s five studio albums, three debuted at number one on the Billboard 200. Coming to his solo career, Tankian released his debut record ‘Elect the Dead’ in 2007. He has since then released ‘Imperfect Harmonies’, ‘Harakiri’, and ‘Orca Symphony No. 1’.

With ‘System of a Down’, Tankian has released albums like ‘Toxicity’, ‘Steal This Album!’, and ‘Mezmerize’. He is also an advocate of environmental and animal protection. Furthermore, he has authored two poetry books, ‘Cool Gardens’ and ‘Glaring Through Oblivion’. He also has credits for appearing in movies like ‘My Little Prince’, ‘The Last Inhabitant’, ‘1915’, and ‘Furious (Легенда о Коловрате)’.

‘System of a Down’ has garnered four Grammy Award nominations. Additionally, the band has also received numerous Kerrang! and MTV awards.

Tankian has not revealed his current salary. However, he has an estimated net worth of around $ 20 million at present.

Tankian’s album ‘Toxicity’ which was released on the eve of 9/11 was surrounded by various controversies. Additionally, the nature of Tankian’s vocals has also been criticized several times. At present, there are no rumors concerning Tankian and his career.

Talking about his body measurement, Tankian has a height of 5 feet 10½ inches (1.79 m). Additionally, his hair color and eye color is dark brown.

Who is Ann Cabell Standish? Find about her age, married life with Robert Mueller, children, net worth and biography