Servando Carrasco is a married man. His wife, Alex Morgan is also a professional soccer player renowned as the Forward for Tottenham Hotspur.

They married on the 31st of December 2014. The couple first met each other at the University and fell in love with each other. Together, the couple is blessed with a daughter, Charlie Elena Carrasco (b. 7th May 2020). 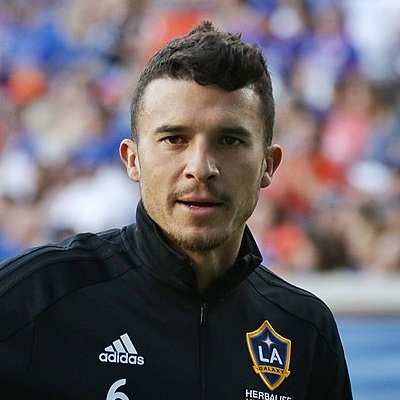 Who is Servando Carrasco?

American Servando Carrasco is a soccer player. Carrasco is renowned for his defensive playing style as a midfielder.

Currently, he is associated with the soccer club, Fort Lauderdale CF.

Servando Carrasco was born on 13th August 1988 in Tijuana, Mexico. He is of Spanish ethnicity with Mexican ancestry. As of now, he is 32 years old. Also, his zodiac sign is Leo.

He is the son of Gloria Carrasco (mother) and Servando Carrasco Sr. (father). His mom, Gloria survived breast cancer two times. He has a sister named Vivian Carrasco. He spent his childhood in Tijuana, Mexico.

Later, his family moved to the States where he completed his High School education at St. Augustine High School in San Diego, California. During High School, he played for the San Diego Surf Soccer Club. At the time, he was recognized as Western League Player of the Year.

After High School graduation, he received a scholarship at the University of California, Berkeley. During his college career, he was named as the All-Pac-10 second team and Pac-10 All-American second team. In four years, he scored 13 goals for the University.

After graduating from the University, the soccer club, Seattle Sounders drafter him at the 2011 MLS SuperDraft. Later, on 2nd March 2011, he signed the Football club. On the 19th of March, he made his football debut against, New York Red Bulls.

On 8th June 2013, he scored his first goal during a match with Vancouver Whitecaps FC. The year, Sounders traded him to Houston Dynamo. He played under the team for a year and joined the soccer club, Sporting Kansas City in 2015.

On 20th July, City traded him against, Amobi Okugo. After that, he played under the LA Galaxy for one year. Currently, he is playing for the soccer club, Fort Lauderdale CF.

As of now, he has an estimated net worth of $300 Thousand. His salary as a soccer player is in the range of $71k per year.

Talking about net worth, his wife, Alex has an estimated net worth of $3 million as of 2022.

He has brown eyes with brunette hair. He stands at a height of 5 feet and 10 inches and weighs around 77 kg.

Talking about his appearance, he has a charismatic persona with an oval-shaped facial feature with a strong jawline. Also, he prefers to have slightly grown facial hair.

You may also read the bio, age, family, career. net worth, salary, and social media of Hande Ercel, Jane Campbell, and Neta Alchimister.