Seth Curry is an American professional basketball player. He plays for the Dallas Mavericks of the National Basketball Association. He is married and has a child. 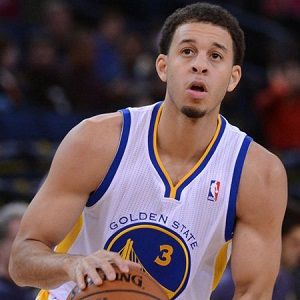 For me, it's just finding ways to create shots. I feel like if I got a shot off, it has a good chance of going in. So it's finding ways of creating different shots. Being smart. I watch the film a lot and different tricks that I can do to get my shot off the ball and creating ways to get shots off of pick-and-rolls or one-on-one situations like that.

I've heard people say I'm a Curry and that helped me get where I am. Sometimes I think it's the opposite.

Seth Curry is in a married relationship with Doc Rivers’ daughter Callie Rivers. In May 2018, Seth and Callie were blessed with a daughter named Carter.

Who is Seth Curry?

Seth Curry is best known for playing in the ‘National Basketball Association’ (NBA).

Likely, he played college basketball for one year with the Liberty Flames before transferring to the Duke Blue Devils.

Seth Curry was born in Charlotte, North Carolina on August 23, 1990. His birth name is Seth Adham Curry and he is currently 31 years old.

His father’s name is Dell Curry and his mother’s name is Sonya Curry. Seth grew up watching his father play and train with his team which helped him study the nuances of the game at a very young age.

He has two siblings namely, Stephen Curry and Sydel Curry. Seth holds American citizenship, but his ethnicity is unknown. His birth sign is Leo.

Seth Curry’s basketball career started from his school days. In his senior year at school, he averaged an impressive 22.3 points, 5.0 assists, and 5.0 rebounds. By the end of the season, he had earned all-state, all-conference, and first-team ‘SAA All-American’ honors.

Additionally, he helped his team amass several victories, which resulted in ‘Charlotte Christian’ making a state final appearance in 2006. After passing out of high school in 2008, he attended ‘Liberty University in Lynchburg, Virginia, USA.

In addition, he also broke the ‘Big South Conference’ scoring record for a freshman in a single season. After spending a year at ‘Liberty University,’ he transferred to ‘Duke University’ in Durham, North Carolina.

Likewise, on December 29, 2012, he scored 31 points against the ‘Santa Clara Broncos’ of the ‘University of Santa Clara.’ In fact, his performance against ‘Santa Clara’ became his new career-best. During his debut game for the team on November 22, he scored 36 points and made six assists and three rebounds.

Similarly, on February 3, 2014, Seth Curry was named to the ‘Futures All-Star’ roster for the ‘NBA D-League All-Star Game’ in 2014. Whereas, he returned to the ‘Warriors’ when the ‘Cavaliers’ decided not to extend his 10-day contract.

Moreover, he averaged 24.3 points per game in the league and earned a place in the ‘All-NBA Summer League’ first team. On January 29, 2017, he scored 24 points against the ‘Spurs.’ Therefore, he went on to score a career-high 31 points against ‘The Minnesota Timberwolves on February 24, 2017.

He has an estimated net worth of around $4 million earned from his professional career. But his salary is not disclosed.

The talented basketball player has maintained his celebrity status and has not given any rumors or controversies to the media.

Seth Curry has a height of 6 feet 2 inches. Additionally, he weighs 84Kg. Seth’s hair color is light brown and his eye color is brown.