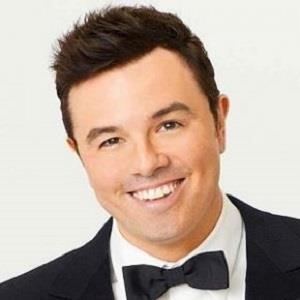 “I love and am fascinated by exciting orchestration—what you can do with a band that size—and I think in many ways it's a lost art.” The success of 'The Simpsons' really opened doors. It showed that if you were working in animation you didn't necessarily have to be working in kids' television

When you are in a room and your job is to write jokes 10 hours a day, your mind starts going to strange places.

What is the relationship of Seth MacFarlane?

Seth Macfarlane is currently dating a lady who is an actress. Her name is Anne Winters.

He has been involved in a number of relationships in his career. He had a 2-year relationship with American Actress, Nicole Sullivan from 1998 to 2000.

Additionally, in the same year, he was also romantically involved with another American Actress Christa Campbell.

He dated Katie from August to December 2009. From 2010 to 2012, Seth dated American TV Personality Trisha Cummings. In 2011, he also had an encounter with American Actress Alexandra Breckenridge.

Furthermore, Seth dated ‘Game of Thrones star Emilia Clarke for about six months from July 2012 to March 2013. In 2017, he dated Halston Sage who is an actress.

Who is Seth MacFarlane?

Seth MacFarlane is an American actor, filmmaker, and singer. Primarily, Seth MacFarlane worked in animation and comedy, as well as live-action and other genres. He is the creator of the show ‘Family Guy.

Additionally, he is the co-creator of ‘American Dad!’, ‘The Cleveland Show’, and ‘The Orville’.

He was born Seth Woodbury MacFarlane in Kent, Connecticut on October 26, 1973. As of 2021, he is 47 years old. He belongs to the mixed ethnicity of English, Scottish, and Irish.

He developed an interest in illustration and began drawing cartoon characters during his childhood. Eventually, he began publishing a weekly comic strip titled “Walter Crouton” at age 9.

Seth attended Kent School. He received his high school diploma in 1991. Later, he went to study film, video, and animation at the Rhode Island School of Design. He earned a Bachelor of Fine Arts degree from there.

Initially, Seth MacFarlane’s thesis film ‘Life of Larry’ caught the attention of Hanna-Barbera Productions. After graduating in 1995, he moved to Los Angeles to begin his career. There, he began working at Hanna-Barbera.

He is one of the animators and writers of Johnny Bravo and Cow and Chicken. Soon, Seth formed a relationship with FOX. Later, the studio offered him a small amount of money to craft a pilot for his show. Eventually, Fox bought Family Guy in 1998 and slated its debut for the beginning of 1999.

Eventually, he appeared in TV shows including ‘The Gilmore Girls, ‘The War at Home, and ‘Star Trek: Enterprise’.

Afterward, he released his first live-action feature film ‘Ted’. Presently, Seth has more than 30 credits as an actor. Seth co-wrote and starred in his second film, ‘A Million Ways to Die in the West.

Apart from his acting career, Seth is also an acclaimed singer. He signed a record deal with Universal Republic Records and released a big band/standards album in 2011. Additionally, he sang big band tunes and retro-style full orchestras at the BBC Proms in 2009.

Seth won three Primetime Emmy Awards for his work on ‘Family Guy. He has been nominated twenty times, winning in 2000, 2002, and 2016. He garnered an Academy Awards nomination in 2013.

It was in the category of Best Achievement in Music Written for Motion Pictures, Original Song for ‘Ted’. Additionally, he has 4 Grammy Award nominations to his name.

Furthermore, he has a total of 21 wins and 51 nominations to his name.

Seth makes at least $50,000 per episode of Family Guy. Moreover, he receives at least $2 million a year as a direct salary from the Fox network.

His created show American Dad is earning billions from syndication deals, DVD sales, and merchandise sales. Seth also has a house on Malibu Beach worth over $15 million.

This house has 5 bedrooms and 6 bathrooms with an area of 6,904 square feet.

Controversies are every day’s meal for Seth’s show ‘Family Guy. Critics have termed his show as juvenile, scattershot, and often bigoted. Furthermore, his show is accused of being Racist, and anti-Semitic.

His album also became controversial for some critics. Seth’s 2013 Oscar-hosting gig was something of a disaster because of all the racist and sexist jokes. According to critics, his movie ‘A Million Ways to Die in the West’ contained infantile humor. Additionally, his movie ‘Ted 2’ was also controversial in many ways.

There have been several rumors of Seth’s relationship with various women over the years. According to the rumors, he has dated Cameron Diaz, Audrina Patridge, and Alexis Knapp.

Furthermore, his hair color is dark brown and his eye color is also dark brown.

Seth is quite active on social networking sites.