Seth Meyers is an American comedian and actor. He is married to Alexi Ashe and the father of two kids.

Meyer was dating a human rights lawyer named Alexi Ashe. They then engaged in July 2013. The two married on September 1, 2013, on Martha’s Vinyard. They also have their son named Ashe Olson Meyer was who was born at Lenox Hill Hospital on March 27, 2016.

On April 8, 2018, the couple gave birth to their second son, Axel Strahl Meyers in the lobby of their apartment. Beginning in July 2013, Alexi has worked as an Assistant District Attorney in Brooklyn assigned to the Sex Crimes Bureau. 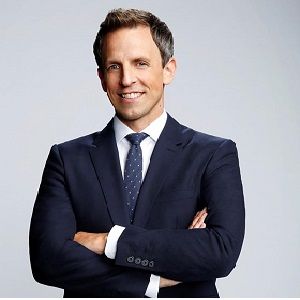 When my girlfriend and I talk about being happy, I'll get choked up, which I think is the greatest gift you can give a girlfriend.

The first time I had disposable income, the two things I cared most about were a television and a couch.

The first time I had disposable income, the two things I cared most about were a television and a couch.

Who is Seth Meyers?

Seth Meyers is an American comedian and actor. He is also an American writer and political commentator. he has also been hosting different popular shows. He hosts Late Night with Seth Meyers, a late-night talk show that airs on NBC.

Seth Meyers is born on Dec 28, 1973, in Evanston, Illinois, US. He is now 44 yrs old. Meyers was born in Evanston, Illinois but was raised in Okemos, Michigan from four to ten years of age. Again they shifted to Bedford, New Hampshire. Meyers’s mother’s name is Hilary Claire who was a French teacher. His father’s name is Laurence Meyers Jr who worked in finance. His younger brother is actor Josh Meyers.

His paternal grandfather was Jewish. Although Meyers has performed at several Jewish Community Centers, he does not consider himself Jewish.

Meyers attended Edgewood Elementary in Okemos. He then studied at Manchester High School West in New Hampshire. He graduated from Northwestern University in Evanston.

Meyers joined the Saturday Night Live cast in 2001. In 2005, he started his career as a writing supervisor. In January 2006, he became co-head writer, sharing the role with Tina Fey and Andrew Steele.

In 2008, Meyers appeared in the 3D film, Journey to the Center of the Earth with Brendan Fraser and Anita Briem. He started his comedy in 2004 with the movie ‘See This Movie ‘with John Cho. In July 2008, Meyer also started to direct the web series The Line on Crackle. Meyers has hosted the same show twice in 2008 and 2009, the Webby Awards. In 2009.

He hosted the Microsoft Company Meeting at Safeco Field in Seattle. Meyers has also hosted the 2010 and 2011 ESPY Awards on ESPN. Likewise in April 2011, Seth Meyers was the keynote speaker at the White House Correspondents Association Dinner.

Seth Meyers: Salary and Net Worth

Seth Meyer’s net worth is estimated to be $10 million.

Seth Meyers’s profession is appreciated by everyone. Whereas his issues are also not much spread on the social media and he hasn’t got any of the rumors.

Seth Meyer is 6 feet tall. He weighs 80 kg. He had colored hair and blue-colored eyes.

Also get to know more about the birth facts, education, career, net worth, rumors, height, and social media of different personalities like Andrew Schulz, Andra Fuller, and Alexander Armstrong.