Updated On October 12, 2022 | Published By: Brandy Stratton | In Entertainment , Married , Relationship
Share this 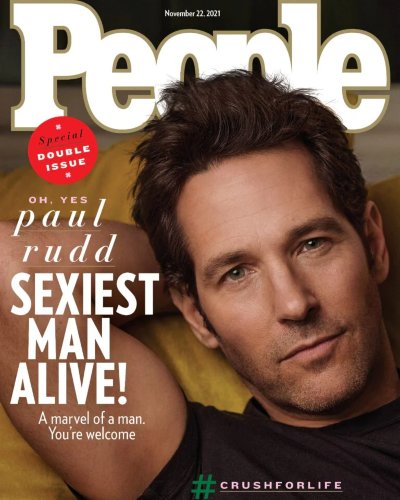 Paul Rudd who is known as Ant-Man has been crowned as 2021’s Sexiest Man Alive by People Magazine. The Superhero has not just stolen hearts but also the Sexiest Man title. The title was given to him in an extended comedy sketch of The Late Show with Stephen Colbert on 9th November 2021.

Paul was put through a series of ‘sexiness’ tests by Stephen which included a physical exam, a Westminister Dog Show-style judging round, and photo shoots as a construction worker and monk.

While proving his sexiness, he poured a gallon of water over his head and said,

“Help me, I’m drowning in sexiness.”

After completing the tests, Colbert announced the result that Rudd failed. Similarly, he began walking away in disappointment and thanked Colbert for making him play. After that, Stephen said,

“There’s nothing sexier than humility … and you passed! Paul, you’re the sexiest man alive.”

Likewise, Rudd was shocked to find out he was the sexiest man alive as he covered his mouth. He was given flowers and a beauty-pageant banner that read ‘Sexiest Man Alive’.

Also read Remarkable FRIENDS reunion happening! All about the amazing cast and co-stars

How did Paul and Julie Yaeger meet?

Paul Rudd and Julie Yaeger meet after his breakout role as Josh in Clueless. After the show, he moved to New York City and hired a publicist. Julie worked at his publicist’s office. He was with all his language when he went to the publicist’s office as he was late for his audition.

Julie offered him to look after his luggage when he went for the audition. After some days, he asked her for a lunch date with him and they began dating soon after.

Also read Who is Elisa Pugliese? Know about the romantic wedding of Elisa and Keegan-Michael Key

Paul is an American actor, comedian, screenwriter, television producer, and film producer. He is best known for his roles in the movies Clueless, The 40 Year Ols Virgin, Anchorman, I Love You, Man, and The Perks of Being a Wallflower. Read more bio…

Why is Pete Davidson so charming as per Emily Ratajkowski?
Tags : Actor Friends