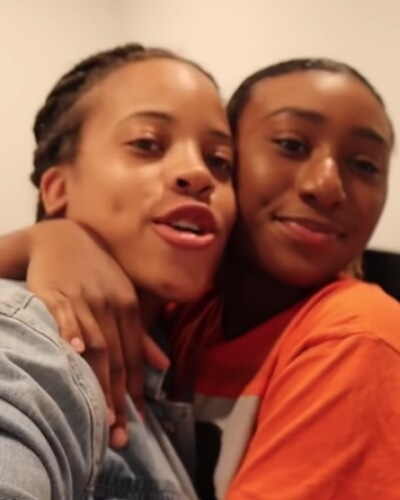 The truth is out now! Noelle Robinson, the only daughter of RHOA’s Cynthia Bailey had kept her fans guessing about the person she is dating. But she has now told the world that she has a girlfriend whom she loves and her name is Alexis Powell.

Noelle Robinson and her new girlfriend

The gorgeous daughter of Cynthia Bailey, Noelle Robinson, 20 had put up a photo recently on her Instagram. In it she was at the door of her car and was holding a box of black and white roses. She had captioned it:

This message send everyone thinking about who possibly could she be dating. Now the secret is out. Noelle is in love with YouTuber Alexis Powell. Because in the comments section, Alexis had written:

The couple has even coined a name for them together and it is “Nolex”. Alexis has graduated from Howard University. She recently had a Q and A for her fans on Instagram Stories in which she disclosed that she and Noelle met at Howard when Noelle allowed Alexis to interview her for her YouTube channel. Alexis asked Noelle:

Noelle and Alexis are seen together in a few TikTok videos on Noelle’s account. One of them is a hilarious short conversation between a mother and a daughter. Whereas in the other, Noelle is a girl talking of all her drama and her friend is not listening at all.

And on Alexis’ YouTube channel and Instagram, there are many videos and photos of the two together including from their recent trip to Las Vegas.

The mother-daughter talk on Noelle’s sexuality

Cynthia, 53 came to know from her daughter about her gender fluidity. She was supportive of her and wanted her to be happy no matter what. Hence,  Cynthia told Noelle to tell her story herself on the show. Cynthia told People in November 2019:

“I’ve always tried to be the kind of parent to Noelle to make her feel like she can tell me anything. I didn’t talk about sex [with] my mom, let alone my sexuality or anything like that. So I really wanted to make sure that she felt comfortable talking to me about it. And she did, as you saw.”

On the show,  Noelle spoke about how we she began to explore her sexuality during the freshman year at the college. She said:

“It really just came out of nowhere. I wasn’t really expecting that to happen.”

Proud mother Cynthia was happy that Noelle could share her story on the show and inspire many others to do so.  Cynthia added:

“You know, in the times we live in, people have their camera phones and I would hate for someone to video her with one of her little friends and then put it out there. Because what happens when you’re on a reality show is if it’s out there before you put it out there, it’s like a secret that we’ve had, that we were trying to hide something.”