Shailene Woodley is an award-winning actress. Shailene is engaged to a football quarterback Aaron Rodgers. 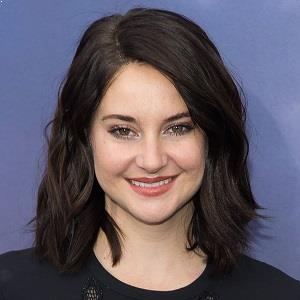 I fell into this business by accident. It wasn't something I ever aspired to be: an actress. It just happened. It has evolved into an insane passion...a creative outlet. But nothing more. It's my hobby... one of the ways I express myself as an artist. And the day it becomes a job... a career... I will quit.

Freshman year, upperclassmen would call me 'anorexic', so I'd go home and cry, wishing hard for the curves to appear.

My biggest thing is really sisterhood more than feminism. I don't know how we as women expect men to respect us, because we don't seem to respect each other. There's so much jealousy, so much comparison and envy. It's just so silly and heartbreaking in a way.

I think it's ridiculous that the boundaries have been crossed between cinema and fashion. They're both their own separate art forms. I did not start acting in order to wear something beautiful and wear lots of makeup. That's not why I do this. I do this because I really love being on a film set.

Shailene Woodley’s relationship status currently is engaged. She is engaged to Aaron Rodgers. Her boyfriend Aaron is a quarterback who plays for Green Bay Packers. The couple were dating since July 2020.

Previously, when he was single she was asked about love-dating-marriage to which she replied: ‘Dating is hard.’

She previously dated an American actor and ‘White Bird in a Blizzard’ co-star Shiloh Fernandez. They were seen kissing during the Film Festival ceremony in Park City on January 18, 2013. But they called it quits in April 2014.

She then dated American Musician Nahko Bear from 7th November 2014 to 2016 and in 2017, was in a relationship with New Zealander Rugby Union Player, Ben Volavola.

Who is Shailene Woodley?

Shailene Woodley is an American actress and activist. She portrayed the role of Hazel Grace on ‘The Fault in Our Stars’.

Additionally, she portrayed the role of a single mother on the HBO’s miniseries ‘Big Little Lies’ for which she garnered the Primetime Emmy Award for Outstanding Supporting Actress in a Miniseries or a Movie nomination.

Additionally, she has a younger brother. At the age of fifteen, she was diagnosed with scoliosis. She became interested in the world of show business since her early life.

Shailene Woodley initially began her acting career in 2001 with minor television roles in ‘The District’ and ‘Crossing Jordan’. She followed with a leading role as California Ford in the television film ‘A Place Called Home’. Later, she played the lead character, Amy Juergens, in the ABC Family series ‘The Secret Life of the American Teenager’.

Shailene has more than 30 credits as an actress. Some movies and television series that she has been part of ‘Replacing Dad’, ‘Without a Trace’, ‘Everybody Loves Raymond’, ‘The O.C.’, ‘Jack & Bobby’, ‘My Name Is Earl’, ‘The Descendants’, ‘Snowden’, ‘Close to Home’ among others.

Apart from her movie career, Woodley is an avid environmental activist and climate advocate. She and her mother co-founded the All it Takes non-profit organization in 2010.

Additionally, she protested against the Dakota Access Pipeline, a US$3.87 billion underground petroleum transport pipeline being built by Dakota Access LLC.

Shailene Woodley garnered the Golden Globes nomination for ‘Big Little Lies’. Additionally, she also garnered another Golden Globe in 2012 for ‘The Descendants’.

Some other award nominations that she has to her name are Primetime Emmy Awards, EE Rising Star Award, EDA Special Mention Award, Awards Circuit Community Awards, Critics Choice Award, COFCA Award and other.

Woodley’s arrest during her protest over Dakota Access Pipeline attracted numerous controversies along its way. She was arrested for criminal trespassing in Saint Anthony, North Dakota.

Additionally, she was believed to be bisexual after rumors regarding her relationship with Ellen Page started surfacing over the internet.

She was also rumored to have been in relationships with Theo James during 2014, Ezra Miller in 2016, Ansel Elgort, and Shiloh Fernandez. At present, there are no rumors concerning her career.