Shamea Morton and Gerald Mwangi first met in a lounge in Atlanta. Eventually, they started dating and tied the knot on the 22nd of July 2017 in a Kenyan ceremony in presence of their close friends and relatives. They even danced together to a Nigerian song at the wedding. Both of them have visited Africa together several times.

They are blessed with a daughter, Shya Nyambura Mwangi on November 25, 2018. 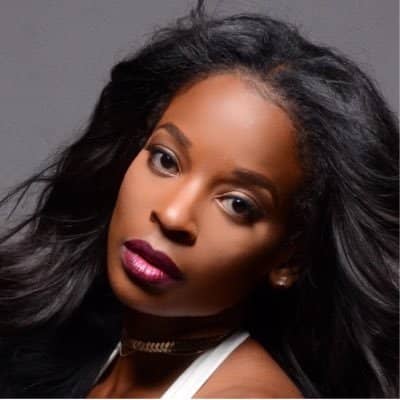 Who is Shamea Morton?

Shamea Morton is an American actress, model, and Reality Tv personality. She is popular for appearing as the guest wife in the reality tv show, The Real Housewives of Atlanta. Likewise, She is also recognized for her intense beauty and charm on her Social Media accounts.

Moreover, she is currently working as the host of Atlanta Hawks in-game and she is also a radio personality at a local station.

There is no information regarding her parents. However, she has uploaded a happy birthday upload for her father and mother’s day for her mother on her Instagram. Her father was born in 1956 AD. Likewise, she has two elder siblings whose names are not disclosed yet.

Her parents joined her to dance classes when she was young. At the age of 4, she was already a leader of her church choir. At the same time, she was named “Little Miss Tiny Star.”

Shamea Morton joined the cheerleading squad of the Atlanta Hawks in 2003 and became the captain of the squad from 2011 to 2012.

In 2002, she made her film debut with the movie, Drumline as a dancer. She then danced for the Georgia Force Arena Football League for 4 seasons.

In 2011, she again returned to the acting with the role of Alexis Bastian in Lesson Before Love. Similarly, she has appeared in several movies including Temptation: Confessions of a Marriage Counselor, CrazySexyCool: The TLC Story, Stock Option, A Christmas to Remember, Deficiency Notice, and The House Next Door: Meet the Blacks 2 among others.


Moreover, she is popular for appearing as the guest wife in the reality tv show, The Real Housewives of Atlanta. Currently, she works as a radio personality at a local station.

Morton has not won any awards but she has attended several award ceremonies including the 2018 Hosea’s Heroes Awards at Loudermilk Conference Center on February 25, 2018, in Atlanta, Georgia.

Speaking of her income, she makes a decent amount of money through her successful career. Likewise, her net worth is calculated at around $2M.

To date, she has maintained her profile clean and has been far from any kind of Controversy.

Morton is a pretty girl with great charm and personality. She stands at a height of 5 feet 10 inches and weighs moderate.

However, there is no more information regarding her dress size, shoe size, and body measurements. Her hair color is brown and her eyes are brown too.

Shamea is quite popular on social media platform. She has around 667k followers on Instagram. Also, she is available on Twitter with over 16.6k followers.