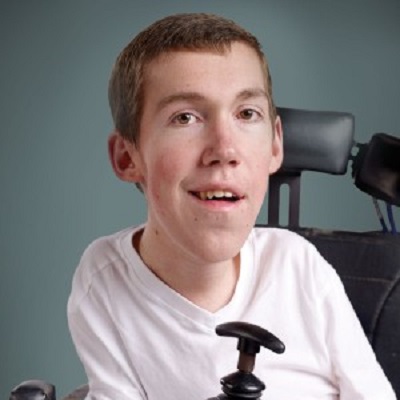 Shane Burcaw is happily married to Hannah Aylward. The couple met online after Hannah watched a documentary about him and sent an email introducing herself.

It was Hannah who approached Shane for the relationship and they had been dated for four years before they wedded. In June 2019, the pair got engaged. Shane had surprised her with a ring box.

After dating for a long time, he got married to her on 4th September 2020. The couple’s wedding was an intimate one officiated via Zoom.

The wedding wasn’t like how they had planned due to the Covid-19 but it was perfect for them.

Who is Shane Burcaw?

Shane Burcaw is an American Author, Blogger, and speaker. He is better known as a speaker working to change the public perception of disability with his honest candor.

The writer was born on May 28, 1992, in Bethlehem, PA, United States. As of 2021, he is 29 years old. He holds an American nationality and his ethnicity is unknown. His Zodiac sign is Gemini.

Shane Burcaw was born with spinal muscular atrophy (SMA) and has been in a wheelchair since the age of two.

Details on his academics, Shane Burcaw graduated from Moravian College with an English degree.

In 2011, Shane started his blog, Laughing At My Nightmare, where he would utilize humor to ramble out on his battles with Spinal Muscular Atrophy. Besides blogger, he is also an entrepreneur and author.

He authored books including Laughing at My Nightmare (2014), the picture book Not So Different (2017)t, and Strangers Assume My Girlfriend Is My Nurse (2019).

In 2012, he runs a nonprofit organization, LAMN Inc. dedicated to providing medical equipment to people with muscular dystrophy diseases along with his cousin, Sarah Yunsov. Whereas, Sarah now works as the Director of Development.

He has a Youtube channel, Squirmy, and Grubs with his girlfriend where the couple shares an amusing and legitimate assessment of what it resembles to be in an integrated relationship. Also, the pair posted a daily Q&A session.

Together, the pair has also merch where they sell online Face masks, I-Shirts, Sweatshirts, and more.

In 2015, his memoir, Laughing at My Nightmare was shortlisted for the ALA Excellence in Nonfiction Award.

As per other online sources, Shane earns an estimated monthly $1.6k-$24.9k and yearly $18.7k-$299.3k respectively throughout his Youtube channel along with his girlfriend.

As for his solo net worth, The blogger estimated net worth is around $750 thousand.

The writer is 4 feet 7 inches tall approximately and his weight is around 27 kg. He has light-brown hair color and his eyes color as well.

Moreover, he joined Twitter in June 2009 with the handle @shaner528 where he has over 21.3k followers. He has a Youtube channel with his wife with the handle Squirmy and Grubs where they have more than 791k subscribers.