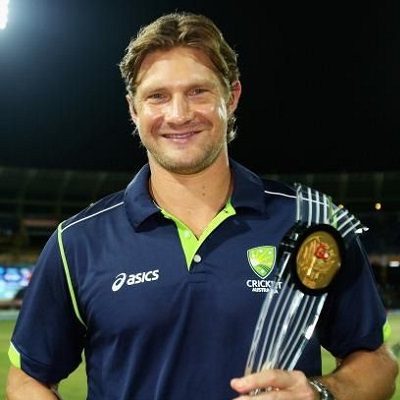 What is the relationship of Shane Watson?

Shane Watson is a married man. Her wife, Lee Furlong is an Australian TV Personality and sports presenter. The couple first met each other back in 2006 through mutual friends and later started dating.

Later, On the 3rd of June 2010, they tied their wedding knot in a very intimate event that took place at boutique resort Bells in Killcare. The wedding was attended by 65 guests.

Together, the couple is blessed with two children including a son, William, and daughter, Matilda.

Who is Shane Watson?

Australian Shane Watson is a cricket Icon renowned for his All-rounder playing skills. He happens to the highest-paid cricketer in the world.

Currently, he plays for Chennai Super Kings in IPL and Quetta Gladiators in PSL.

Shane Watson was born on the 17th of June 1981 in Ipswich, Queensland. His birth name is Shane Robert Watson. His father, Bob, and mother, Bard Watson are of British-Scottish ethnicity.

He has a sister, Nicole Watson is a consultant and producer by profession. Talking about his educational background, he attended the Forbes School of Business Ashford University.

In 2000, Shane Watson joined Australian Cricket Academy. Later, in 2001, he started his journey as a cricketer with the domestic team, Tasmania.

The following year, he was selected for the national cricket team of Australia and made his ODI debut against South Africa. Later, in 2004, he joined Hampshire. The same year, he made his test debut against Pakistan as a bowler.

The following year, he signed with Queensland Cricket Team. Along with the team, he played for the 2005 Ashes series, 2006 ICC Champions Trophy, and 2006–07 Ashes series.

Moving forward, in 2010, he joined the Australian team, New South Wales, and played for the team till 2015/16. In between, he also played for Sydney Sixers and Brisbane Heat too. Later, in 2016, he announced that he is taking retirement from his international career.

Later, in 2008, he started playing for the Indian Premier League with the cricket franchise, Rajasthan Royals. He signed a contract worth $125k for a season.

In the 2014 IPL season, Royals retained his for $2 million that made him the highest-paid overseas player. Moving forward, in 2016, he signed a two-year contract with Royal Challengers Bangalore worth $1.4 million.

Later, in 2018, he signed with Chennai Super Kings and currently playing for the team.

In 2016, he debuted in the league with Islamabad United making him the first foreign player to be picked in the draft.

Later, in 2018, he joined Quetta Gladiators and currently plays for the team.

As of 2020, he has an estimated net worth of $25 million. His salary as an elite cricketer is in the range of $2.9 million. Besides that, he also makes through the brand endorsements too.

Back in 2019, Chennai Super Kings retained him with the contract worth $5.3 million. Apart from that, his earnings as Diamond categorized cricketer in PSL are in the range of $70k or above per season.

As of now, he has managed to remain far from any kind of controversy that created a buzz in the media. Similarly, there are no rumors related to him.

Shane Watson has blue eyes with auburn hair. He stands at a height of 6 feet and weighs around 93 kg.