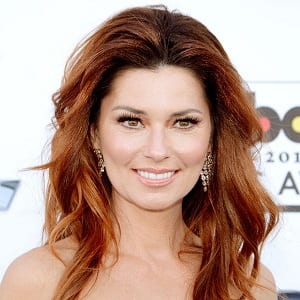 It's important to give it all you have while you have the chance.

Horses calm me. I love being around them. They smell great, they are beautiful to look at, they are loving, demanding, temperamental, and they settle you.

I feel like I'm on top of the world. Honestly, I feel like I've climbed a very giant mountain, and I'm just standing right on top with my arms wide open and breathing rarified air.

I find that the very things that I get criticized for, which is usually being different and just doing my own thing and just being original, is the very thing that's making me successful.

Being betrayed is one of the most valuable lessons life can teach.

Shania Twain is in a happy marital relationship with her husband!

Twain is currently married to Frederic Thiébaud. They married on 1 January 2011. Fredric is an executive at Nestlé. The couple’s marriage is going strong as there is no news regarding any extramarital affairs at present.

They have a son, Eja D’Angelo from this marriage. Their marriage came to an end on 9 June 2010.

Who is Shania Twain?

Shania Twain is a Canadian singer and songwriter. She is the best-selling female artist in country music history and has sold over 100 million records.

Additionally, she is widely considered the ‘Queen of Country Pop’. To date, she has received five Grammy Awards and 27 BMI Songwriter Awards.

Twain was born in Windsor, Canada as Eilleen Regina Edwards on August 28, 1965. She was born to parents Sharon and Clarence Edwards. Additionally, she has two sisters Jill and Carrie Ann. raised by a single mother.

She became interested in the world of music during her childhood years and began singing at the early age of three.

In addition, she learned to play guitar when she was eight and by the age of 13, she was already invited to perform on the CBC’s ‘Tommy Hunter Show’.

She is of Canadian nationality. Furthermore, she belongs to a mixed ethnic background of Irish, Northern Irish, English, and French-Canadian.

Twain initially began her career as the singer for a local band called ‘Longshot’. Later, she was signed to Polygram Records. In 1993, she released her first album titled ‘Shania Twain’.

Next, Twain alongside Robert John “Mutt” Lange co-wrote 10 of the 12 tracks for her next album ‘The Woman in Me’ which was released in 1995.

She has made her name as one of the important country singers of this generation.

Twain’s other albums include ‘Come On Over’, ‘Up!’, and ‘Now’. Additionally, she has also been part of several tours like Come On Over Tour, Shania: Still the One, and Rock This Country Tour among others.

Apart from her career in music, Twain has also appeared in several movies and television shows like ‘Jalen Vs. Everybody’, ‘Broad City’, and ‘I Heart Huckabees’. Furthermore, she served as a guest judge on ‘American Idol’ in 2009.

Twain has not revealed her current salary. However, she has an estimated net worth of around $400 million as per 2022’s data.

Twain became part of a controversy after her ex-husband reportedly had an affair with her best friend, Marie-Anne Thiébaud. This news was covered by several news outlets.

Additionally, she made the news recently after she said that if she could have voted in 2016, she would have voted for Donald Trump. At present, there are no rumors concerning Twain and her career.

Tags : ‘Come On Over’ ‘Now’ ‘Queen of Country Pop’ ‘Up!’ Canadian singer and songwriter