Shanna Moakler is an American model, actress, as well as a reality television star. She had won the title of Miss New York USA pageant in 1995 and had participated in Miss USA. She was married to Oscar De La Hoya and the mother of three kids.

Moving towards Shanna Moakler’s relationship status, in 1997 she had dated Bill Idol and in the same year, she had dated Oscar De La Hoya and had engaged.

The couple was blessed with a daughter in 1999. Similarly, in 2001 she had dated with actor Dennis Quaid. But on 30th October 2004, she had ring the wedding bell with, Travis Barker.

And again the couple was blessed with two sons. Unfornutaley the couple had to separate in 2008.

The alone and being frustrated, she again starts to date with other men. In 2014 she had the relation with Hells Angels biker, Bryan Sollima. 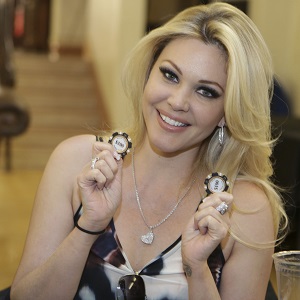 My deepest condolences for DJ AM, you were a great artist and will be severely missed. My thoughts and Prayers to his family and friends

I think reality TV is so popular because it makes everyone in the country feel like, 'Hey, I can be on TV. I can be a star overnight.' I think America also has a little voyeurism in their hearts.

Who is Shanna Moakler?

Shanna Moakler is an American model, actress, as well as a reality television star. She had won the title of Miss New York USA pageant in 1995 and had participated in Miss USA.

Miss Newyork of 1995 was born on 28th March 1975. She was the daughter of  Gail Moakler and John W. Moakler III who lived in  Providence, Rhode Island, United States.

She was the youngest among three of her siblings. When she was young she enjoyed her weekend visit to her grandfather’s farm, where she could play outdoors and be a tomboy.

Shanna Moakler started her career when she was 15 years old where she had kept her first step on Miss Teen USA in 1992. But she had won the title Miss Teen All-America in 1993.

In 1995 she had appeared in Miss USA and became the first runner-up. She also participated in the 2009 Miss USA gay marriage controversy.

In 2003, Moakler appeared on Punk’d to help Ashton Kutcher and his crew set up her then-boyfriend, Travis Barker. Similarly, she made a guest appearance as Mariska on the television program Joey, starring Matt LeBlanc, and also made an appearance as Josie on the show Jake in Progress, featuring John Stamos in 2005.

In 2006 she had appeared in an episode of CSI: Crime Scene Investigation entitled “Poppin’ Tags”, played a character named J-Lady.

Not only on television she had also appeared in movies from 1997. Her first movie was  Poison Ivy: The New Seduction. She had appeared in Telling You,  The Wedding Singer,  Pauly Shore Is Dead,  Critical Mass, Seeing Other People,  Big Momma’s House 2, and  I Love the New Millennium.

As she is hardworking and has played many roles she earns a net worth of $15 million as of 2022.

Unlike other celebrities, Shanna hasn’t suffered from any kind of rumors and controversy.

Through the sources, there aren’t any rumors or controversies published.

Shanna Moakler stands at a height of 5 feet 8 inches (1.73m) with bodyweight 53 kg. Her measurements as 34 bust, 24 waists, 34 hips, sizes. Her hair color is light blonde and eye color is hazel.

Why Is Shanna Moakler “Hurt”? Get To Know All About Her And Her Ex Husband Travis Barker’s Relationship!