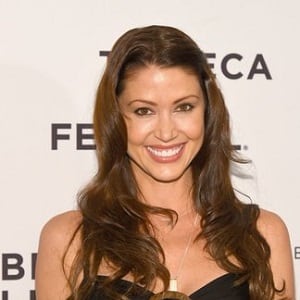 Most people don't realize turkeys are friendly, they're social, they're loyal, they have emotions.

Things change in different countries as people grow, and as generations change.

We don't live in a world that's black and white.

Animals mean everything to me. We have to be their voice and protectors.

Shannon Elizabeth was previously married to American actor, writer, film producer, and director Joseph D. Reitman. They dated from 1992 and married ten years later on 15 June 2002. The marriage came to an end in 2007.

More recently, she is in a relationship with American actor Russell Simmons. They started to date each other in 2014.

Who is Shannon Elizabeth?

Shannon Elizabeth is an American actress and former fashion model. People mostly know her for her roles in movies including ‘American Pie’, ‘Jay and Silent Bob Strike Back’, and ‘Scary Movie’.

Additionally, she has also appeared in several horror films like ‘Cursed’, ‘Night of the Demons’, and ‘Jack Frost’.

Elizabeth was born in Houston, Texas on September 7, 1973. She was born as Shannon Elizabeth Fadal to parents Patricia Diane Fadal and Gerald Edward Fadal.

As a child, she became interested in the world of modeling and also enjoyed playing tennis. She is of American nationality. Furthermore, she belongs to a mixed ethnic background of Syrian/Lebanese, English, Irish, and German.

Talking about her education, Elizabeth attended Waco High School and graduated in 1991.

She had a breakthrough in her career after she was cast to play Nadia in the popular ‘American Pie’ movie in 1999. Additionally, in the same year, she also appeared as Cherry Valence in the TV series ‘Good vs Evil’. Since then, she has appeared in numerous other movies and television series. All in all, she has over 50 credits as an actress.

Additionally, she also has 2 credits as a producer. Apart from her work in television and movies, Elizabeth is also involved in several charity works. She is the co-founder of a non-profit animal rescue organization called Animal Avengers.

Elizabeth won the Hollywood Breakthrough Award in 2001 for her performance in ‘American Pie 2’. Additionally, she has also garnered the MTV Movie Award and PFCS Award nominations.

Elizabeth has not revealed her current salary. However, she has an estimated net worth of around $9 million at present.

Elizabeth’s eviction from ‘Celebrity Big Brother’ was emotional and controversial. Additionally, several of her roles in movies have also been criticized over the years. At present, there are no rumors concerning Elizabeth and her career.

Talking about her body measurement, Shannon Elizabeth has a height of 5 feet 9 inches (1.75 m). Additionally, she weighs around 125 pounds or 57 kg.

Elizabeth is active over social media.