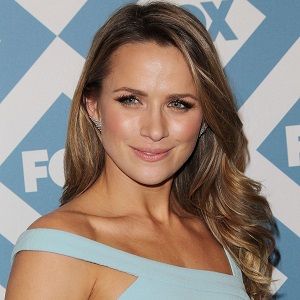 Shantel VanSanten was reported to be in a relationship with actor Michael Johnson in 2008. They were spotted together in various places. But no sooner they separated in mid of 2009.

Shantel was also dating One Tree Hill co-stars, James Lafferty. They were spotted going outing in June 2009 and dated for under a year before going separate ways in May 2010.

Shantel was in a relationship with actor Jon Fletcher after having grown cozy during the shooting of the 2015 movie, The Messengers.

Their relationship was kind of confirmed in September 2015 after they were pictured holding hands and putting on affectionate display while holidaying in Paris. But shortly they ended their affair.

Shantel is now dating Victor Webster. They met each other in the year 2017 and are still together.

Who is Shantel VanSanten?

Shantel VanSanten is one of the popular American model and actress. Being a model, she features in popular magazines like Teen Vogue and Seventeen and represented by Page Parkes Management.

VanSanten was born on July 25, 1985, in Luverne, Minnesota, the U.S. The 35 aged actress was raised in Spring, Texas. VanSanten is of Norwegian, and Dutch descent holding American nationality.

She also has a younger brother and sister. Her mother’s and father’s name is unknown.

Shantel attended her schooling from Incarnate Word Academy in Houston. After passing her schooling, she get to enroll at the Texas Christian University in Fort Worth, Texas.

Shantel VanSanten started her career by appearing on the television screen. She was the finalist on NBC’s reality television series Sports Illustrated: Swimsuit Model Search. She doesn’t move forward to the show as she gets eliminated in the first episode of the series.

In 1999, Shantel played the role of Kaori in the English version of the series Steel Angel Kurumi. In 2007, she gets the opportunity and signs the contract for a film adaptation of the novel t.A.T.u. Come Back. There she works alongside Mischa Barton. The movie was shot in Los Angeles and Moscow throughout 2007. It was premiered on January 25, 2011, in Russia and a year later in the USA.

VanSanten started her career in films in 2009. VanSanten got a chance to perform in a variety of popular films like The Final Destination. She played there the role of Lori Milligan. She also stars in the movie alongside Bobby Campo, Lara Grace, Nick Zano, and Haley Webb.

The same year, she appears on the seventh season of The CW TV drama series One Tree Hill. In the drama, she plays the role of Quinn James. She worked on the series to its ninth season and the last season in 2012. VanSanten also has remarkable performance in her modeling career. She ranks 24 on the Buddy TV’s 100 Sexiest Women of 2010. The following year, she ranks 21.

Working as an actress, she is represented by Leverage Management and as a model, by Page Parkes Management.

Shantel VanSanten: Salary and Net Worth

Shantel from her acting and modeling career must have good earning. Her net worth is $5 million.

Shantel is running his professional and private life smoothly without harming others. So, he doesn’t involve in any of the rumors.

Shantel is active on different social media and keeps on updating them with her latest work and photos. She is active on Instagram and has got more than 793K  followers.