Shara Grylls is an author and is the wife of renowned adventurer Bear Grylls. She is the mother of three boys. 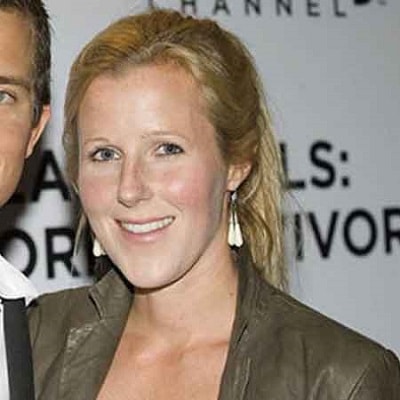 Shara Grylls is a married woman. She has been married to adventurer, writer, and television presenter, Bear Grylls since 2000.

They met for the first time on the north coast of Scotland, where he was staying with a friend, preparing himself to climb Mt. Everest. He was told that it was a bad time for him to fall in love with Shara as he had to leave to climb Everest a few months after meeting her.

Eventually, he proposed to Shara without much delay when he returned home after scaling Everest.

Also, she takes care of their pet two dogs, and two cats.

Who is Shara Grylls?

Shara Grylls is the author of some inspirational books such as “Never Stop Holding Hands”, ‘Other Marriage Survival Tips”.

Also, she came into the limelight after marrying world-renowned adventurer as well as TV Personality, Bear Grylls.

She was born in 1974, in England, United Kingdom. Her birth name is Shara Cannings Knight. She has not disclosed any information about her father, mother, siblings, and childhood.

Shara holds British citizenship but her ethnicity is unknown.

She might have attended some reputed colleges and universities but she has not disclosed their names.

She was interested in writing since her early ages. She published her debut book, Marriage Matters, in 2006 which was published by Pen Press Publishers and the book is a compilation of philosophies on successful marriages.

Moreover, Shara Grylls has made several public appearances with her husband, Bear Grylls. She published her second book, ‘Never Stop Holding Hands: And Other Marriage Survival Tips ’ in 2012 which was inspired by a piece of advice, given by an elderly couple to Shara and her husband on their wedding day.

She might have accumulated a decent sum of money from her writing career however, she has not disclosed her exact net worth, salary, and income.

Shara has not been involved in any rumors and controversies in her personal and professional life.

Shara Grylls has blue eyes and blonde hair. But, her height, weight, shoe size, dress size, etc. are not available.

To know more about Rachel Hollis, Stacey Dooley, and Ken Jennings, please click on the link.