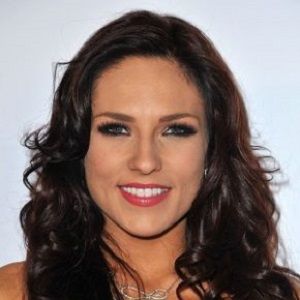 This is very much like an intertwined office love triangle, love affair. We are having a lot of fun in this trio, but we don't quite have the moves down yet. I think I'm still recovering from that performance. I know they are still recovering. They loved that.

They were all getting along really well, and they were even coming up with their own dance moves tonight.

I am a professional. Look, we have a lot of chemistry and we have a lot of fun, but first and foremost we are trying to do a really great job in this competition. I want Bonner to be around until the end and I want to take this man to the finale. That is our priority. Everyone is making a lot of our really obvious chemistry.

Sharna Burgess is an unmarried woman till now. She doesn’t have a long list of boyfriends. She was in a serious relationship with Paul Kirkland in her past. They began dating each other back in the year 2010. At that time, the couple was very passionate about each other. They were together for five years. Their relationship came to an end in 2015. After that breakup, she began dating her former dance partner Bonner Bolton for few months. After less than a year of dating, their relationship came to an end.

Since then, she has not been in any relationship till now. In 2017, there were rumors that she was dating Pierson Fode, actor and model. But their affair has not been confirmed and she has said that she is single.

Who is Sharna Burgess?

Sharna Burgess is an Australian ballroom dancer and reality TV personality. She is best known for being a professional partner and troupe member on the ABC series Dancing with the Stars. She is also known for her work as an assistant choreographer for So You Think You Can Dance.

Sharna was born on June 21, 1985, in Wagga Wagga, New South Wales, Australia. Her nationality is Australian and she is of Australian ethnicity.

When Sharna was 18, she moved to London to pursue her career as a professional dancer. Her first television appearances were on the Australian Dancing with the Stars and So You Think You Can Dance in Belgium and the Netherlands.

She joined the cast of season 13 of Dancing with the Stars as a troupe member. While on the troupe, she also assisted So You Think You Can Dance choreographer Jason Gilkison on both the Australian and American versions of the show. The couple made it to the finals but finished in 2nd place.

Sharna Burgess: Salary and Net Worth

Her salary and income have not been revealed yet. She has an estimated net worth of750 thousand dollars.

Furthermore, I also find out more about the early life, career, net worth, relationships, and controversies of dancer and reality TV personality like Melissa Rycroft, Sarah Ashley Hunt, and Dina Lohan.