Posted by MarriedBiography Posted on December 8, 2020 | In Affair , Dating , Relationship
Share this 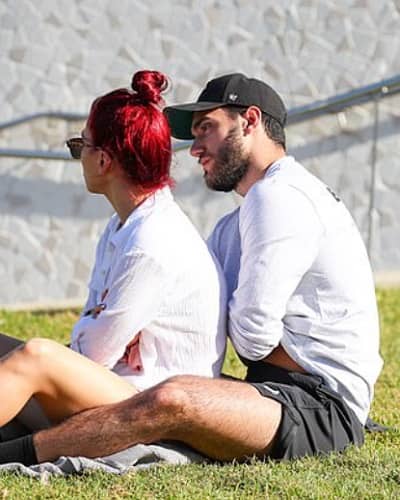 Sharna Burgess is officially off the market. Sharna has been seen with a mystery man going on dates frequently during the Covid-19 pandemic. She has kept her love life private as of now.

“I thought that when I met someone, I would be like scream it from the mountain tops. And it’s actually, it’s almost the opposite. I want to hold it close to me for just as long as I can to stay in this space and just enjoy that human for as much as I can.”

She met her new beau through a mutual friend. She might reveal about her mystery man in the future.

Also read Are James Charles and Larry dating? Who is Larray’s boyfriend? Also, find out James’s net worth in 2020

Sharna Burgess was dating Paul Kirkland in the year 2010. Paul was a British dancer and their similar interest might have been the reason for their relationship. They dated for almost 5 years before splitting. After that, she was rumored to be dating Bonner Bolton. Bolton was her partner in the show Dancing with the Stars. They were said to be dating around March 2017 but the two denied.

Again in April 2017, she was rumored to be dating American actor Pierson Fode. But they never confirmed the news.

What is the age of Sharna Burgess?

Sharna Burgess was born on 21st June 1985. She is 35 years old at present and is from Wagga Wagga, New South Wales, Australia. Sharna is the daughter of Ray Burgess and Lucy Burgess. Even though she was born in Australia, she traveled to England in her late teens. She was a tomboy in her early years as she used to climb trees and acted tough.

Since her early years, she was interested in dance. She grew up learning different types of dance like ballet, jazz, and gymnastics. At the age of 8, she started her doing ballroom dance and toured with production to Simply Ballroom.

When Burgess was 15 years old, she was chosen to represent Australia in the World Championship. Likewise, she also performed in the Summer Olympics of 2000 in their Closing Ceremonies.

Sharna Burgess has around 861k followers on her Instagram account. She has made more than 1.7k posts on her account. She posts pictures with her friends and dog. Sharna likes changing the color of her hair occasionally. On Twitter, she has 161.3k followers and she joined Twitter in April 2009.

Burgess has around 132.5k followers on her Facebook account. Her Facebook page was created on 18th July 2015. Sharna also has a YouTube channel with 15k subscribers. She makes beauty related videos. Similarly, she also makes challenges videos with her co-stars.

Burgess also makes TikTok videos. Her TikTok account has 43.5k followers and she has gained 247.1k likes. Her videos get thousands of views and she makes duet videos usually.

Sharna Burgess is an Australian ballroom dancer and reality TV personality. She is best known for being a professional partner and troupe member on the ABC series Dancing with the Stars. She is also known for her work as an assistant choreographer for So You Think You Can Dance. Read more bio…

Tom Malone Jr moves in with his girlfriend, Bryony Briscoe!
Tags : dancer Dancing with the Stars