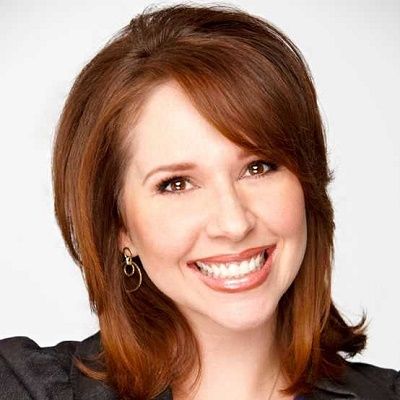 Sharon Faetsch is happily married to her long time boyfriend Langdon James. They exchanged vows on May 21, 2002.

James is an entrepreneur, stand-up comedian, and a founder of ‘BuzzTown Digital Marketing‘. This couple together has two children.

Sharon Faetsch is an American model. host and actress. She is best known as a host for America’s largest broadcast shopping channel QVC.

This anchor was born on January 17, 1974, in New York, the United States with star sign Capricon. There is no information about her father. Her mother’s name is Jeanne.

She also has a sister named Barbara. Sharon is very close to her family and often shares pictures on social media.

She was interested in music from childhood and has studied classical music for seven years. She belongs to Caucasian descent. There is no information about her educational qualification.

Sharon Faetsch worked for six years as a singer and performer in Las Vegas, where she began her performing career. In 1999, Faetsch worked as a singer and actor for Farrington Entertainment & Productions at the Venetian Hotel. From 2000-2002, this host acted for Paramount Pictures at ‘Star Trek: The Experience’, Nevada.

She has appeared in the movie The S.I.N in 2001 which was directed by Kelly Schwarz. In 2002, she gave audition as an anchor for QVC but missed this first chance because of her wedding. A year later, Sharon again applies for QVC, and this time she flew to New York for her call back.

She became an official program host for the shopping channel in 2003. She sold fashion, sports gear, jewelry, and more on this network. Sharon also hosted the 2 pm LOGO show.

She also often appeared on QVC’s sister channel QPlus giving fashion tips. However, Faetsh left QVC in 2018 to take care and spend time with her children.

As an official host of QVC, Sharon received a pretty good salary. The average salary of this host is estimated to be $56,000. Meanwhile, according to some sources, she has a net worth of $2 million.

As of now, this host is far from rumor and scandals. She has managed to keep herself out of any controversy. She is doing well in her career.

Sharon Faetsch stands 5 feet 2 inches tall with decent weight. Likely, she has light brown eyes and brown hair. Her shoe size is 8 US.