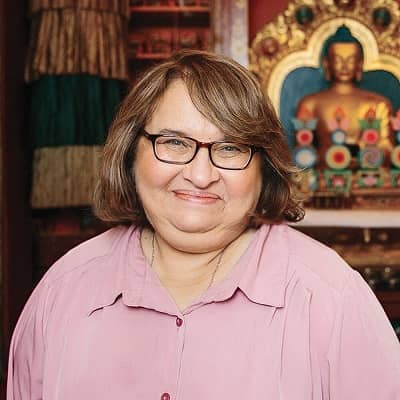 Sharon Salzberg is very secretive regarding her private life. Also, she doesn’t seem in any dating affair to date neither got married.

Furthermore, she is possibly single at the moment.

Who is Sharon Salzberg?

Sharon Salzberg is a New York Times bestselling author who is also a teacher of Buddhist meditation practices in the West.

The author was born on August 5, 1952, in New York. She holds an American nationality and is of Jewish descent.

At an early age, she lost her parents, her mother died when she was nine years old. Her father was hospitalized because of overdosed at that time she was eleven years old.

Later, her father placed in the mental health system, where he remained until his death. Until the age of 16, she already had lived with five different families.

Sharon attended the State University of New York, Buffalo. In 1969, she first encountered Buddhism in an Asian philosophy course in her sophomore year.

He was influenced by Buddhism afterward she took an independent study trip to India. In 1971, she attended her first intensive meditation course in Bodh Gaya, India.

In 1974, she returned to the US, she then began teaching vipassana meditation. In the same years, she founded the Insight Meditation Society, a non-profit organization for the study of Buddhism alongside Jack Kornfield and Joseph Goldstein at Barre, Massachusetts.

The organization is now one of the most prominent and active meditation centers in the Western world. In 1989, Sharon together with Joseph establish the Barre Center for Buddhist Studies (BCBS).

Similarly, she appeared in the 2005 Mind and Life Investigating the Mind Conference as a panelist with Dalai Lama in Washington, DC. She serves as a contributing editor of Oprah’s O Magazine for several years.

Furthermore, she is the host of her own podcast, The Metta Hour, featuring 100+ interviews with the top leaders and voices in the meditation and mindfulness movement.

Sharon is the author of eleven books, some of them are enlisted below,

The author keeps surrounded herself with positive vibes so, she hasn’t yet come into the limelight because of any controversial acts and disputes.

Sharon has not yet revealed her exact net worth, remuneration, and real estate to the public. However, she might have earned a good amount of fortune through her profession which is still under review.

Besides her profession, she has a self-titled youtube channel, she earned around $117.00 to $234.00 US dollars from her Youtube channel at the moment.

The body measurement of Sharon’s including her height, weight, and others are not available at the moment.

However, she got a pretty brown pair of eyes with light-brown hair colored.