Sharon Stone is an actress, former fashion model, and producer.

Sharon Stone has been in relationships with numerous celebrities in her career. She dated actor Hart Bochner in 1988. She was married to Michael Greenburg from 18 August 1984 to 20 January 1987. In 1992, she dated country singer Dwight Yoakam.

Stone was married for the second time to Phil Bronstein. The pair was together 14 February 1998 to 29 January 2004. They adopted a son, Roan Joseph Bronstein in 2000. Stone has also been in relationships with Adrien Brody, Craig Ferguson, Christian Slater, Rick Fox, Jared Leto, Larry Austin, Shareef Malnik, Martin Mica, Antonio Banderas, and David DeLuise.

At present, Stone is in a relationship with Angelo Boffa. 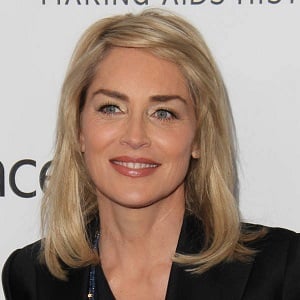 I was, like, forty at birth. When I wasn't even a year old, I spoke, I was potty trained, I walked and talked. That was it. Then I started school and drove everybody crazy because they realized I had popped out as an adult. I had adult questions and wanted adult answers.

Any man in Hollywood will meet me if I want that. No, make that any man anywhere.

My personal style and public style are very different. When I go out, I play dress up.

It's my experience that you really can't lose when you try the truth.

I like to drive with my knees. Otherwise, how can I put on my lipstick and talk on the phone?

Who is Sharon Stone?

Furthermore, Stone has appeared in several other movies and television series including Martin Scorsese’s ‘Casino’, ‘The Mighty’, and ‘The Muse’ among others.

Stone was born as Sharon Vonne Stone in Meadville, Pennsylvania on March 10, 1958. She was born to parents Dorothy Marie and Joseph William Stone II.

Her mother was an accountant and her father was a tool and die, manufacturer, and factory worker. Additionally, he has an older brother, Michael, a younger sister, Kelly, and a younger brother, Patrick.

She became interested in the world of modeling since her childhood years. She is of American nationality. Furthermore, she belongs to a mixed ethnic background of English, German, Scottish, and Irish.

Talking about her education, Stone attended Saegertown High School in Saegertown. Additionally, she also joined the Edinboro University of Pennsylvania but left and moved to New York to become a fashion model.

Later, in 2016, she returned to Edinboro University to complete her degree.

Sharon Stone initially started her career as a model. Later, however, she decided to pursue her career in acting. In 1980, she had a brief role in ‘Stardust Memories’. In 1981, she also had a role as Lana Marcus in ‘Deadly Blessing’. Additionally, she was also cast in ‘Les Uns et Les Autres’ by the French director Claude Lelouch.

She played a ditsy bimbo meter maid in the TV series ‘Silver Spoons’ on December 4, 1982. She also appeared in the ‘Remington Steele’ episode on February 18, 1983. Since then, she has appeared in numerous other movies and television series. All in all, she has over 120 credits as an actress.

Some other movies and television series that Stone has appeared in are ‘Mosaic’, ‘The Disaster Artist’, ‘All I Wish’, ‘Agent X’, ‘Life on the Line’, ‘Law & Order: Special Victims Unit’, ‘Basic Instinct 2’, ‘Will & Grace’, ‘The Practice’, ‘Harold and the Purple Crayon’, ‘Roseanne’, ‘Sliver’, ‘War and Remembrance’, and ‘Bay City Blues’ among others.

Additionally, she also has more than 15 credits as a producer and two credits as a writer. Apart from her acting career, Stone has appeared in the covers and several photo sessions. She is also an activist and has traveled to Israel to promote peace in the Middle East. Furthermore, she was a guest of honor at the Pilosio Building Peace Award in Milan in 2015.

Stone garnered the Oscar Award nomination in 1996 for her performance in ‘Casino’ in the category of Best Actress in a Leading Role. Additionally, she has also received numerous Golden Globe nominations and has won the award in 1996.

Furthermore, she has also won the Primetime Emmy Award, Career Achievement Award, and Hollywood Film Award. All in all, she has 22 wins and 36 nominations to her name to date.

Stone has not revealed her current salary. However, she has an estimated net worth of around $60 million at present.

Stone has received several criticisms due to her numerous projects. She was accused of not doing proper researches and methods of preventing malaria after she helped solicit pledges for $1 million in five minutes for mosquito nets on January 28, 2005, in Tanzania.

Additionally, she was also criticized due to her comments on the red carpet with Hong Kong’s ‘Cable Entertainment News’. At present, there are no rumors concerning Stone and her career.

Furthermore, her hair color is dark brown and her eye color is blue.

Stone is active over social media. She has more than 211.1k followers on Twitter. In addition, she has over 2.6M followers on Instagram.

Similarly, her Facebook page has more than 600k followers.