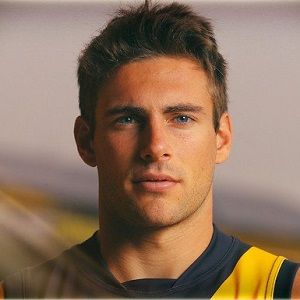 Shaun Hampson has been dating supermodel Megan Gale from January 2011. Megan is an Australian model, brand ambassador, fashion designer, and actress. They are in a sweet and strong relationship and has welcomed their first child, River in May 2014. They recently engaged in July 2017. Furthermore, they have one daughter, Rosie, born in September 2017. Now, they are enjoying their relationship and living happily with each other.

Who is Shaun Hampson?

Shaun Hampson is a former Australian AFL player a who played as a Ruckman for the Richmond and Carlton Football Clubs in the Australian Football League (AFL). Furthermore, he played 98 games during his illustrious 12-year career.

Shaun Hampson (Hammer) was born on 21 March 1988 in Queensland, Australia. He is of an Australian nationality. He was educated through John Paul College. Furthermore, there is no information about his parents and his siblings.

Shaun Hampson is better at sport at school, including athletics, swimming, and soccer. In 2005he joined Mount Gravatt Football Club in and became number one ruckman at the end of that year.

In 2006, Hampson was drafted in the priority round of the (Pick 17th overall) 2006 AFL Draft by the Carlton Football Club and made his debut in Round 21, 2007 against North Melbourne. Here he played 63 games until the end of 2013 season. Before 2012, he had laser eye surgery to correct short-sightedness which was giving a problem early in his career.

Later in October 2013 he was traded to Richmond and made his debut in round one of 2014 season, against the Gold Coast Suns. However, his wonderful career was hit back by his back injury which cost him to maximum play time in AFL level and VFL in 2017. Furthermore, in 2018 he announced his immediate retirement from AFL football on 26 June 2018 because of his two-years back troubles.

Also Read: Biography of Mike Golic Jr and know about his ethnicity, relationship and many more.

There are no rumors and controversy relating to his life.

He is tall with a height of 6ft 7 inch and weighs around 104 kg. His eyes are blue and hair is blonde.