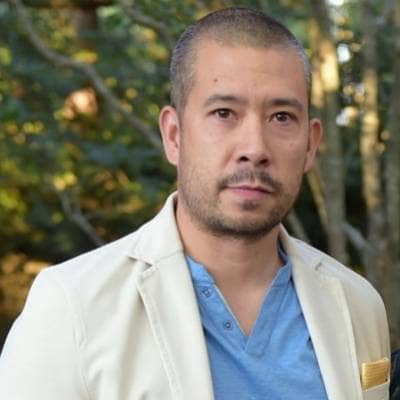 Facts of Shaun So

Relationship Statistics of Shaun So

Currently, Shaun So is a married man. He is in a married relationship with his long-term partner named Anna Chlumsky. Shaun first met her at a college party in 2000. The duo was a student of the University of Chicago.

The couple had a long-distance love affair due to Shaun’s military service. So was posted to Afghanistan from 2004 to 2006. Shaun came back safely from Afghanistan in January 2006 and in May that year, the officer proposed to his long-term girlfriend.

The couple finally got engaged in October 2007. They tied the knot on March 8, 2008, in Brooklyn, New York in a private wedding function managed by family members and close mates. His wife, Anne is an American actress, model.

Currently, the duo has two daughters named Penelope Joan who was born in July 2013, and Clara Elizabeth born in August 2016 respectively.

Who is Shaun So?

Shaun So is an American military professional who presented as a Counterintelligence Special Agent in the U.S. Army for a long period of 8 years.

At present, So is the CEO as well as the managing partner of The So Company.

Talking about his nationality, Shaun holds American as well as Chinese citizenship. Also, he is of Asian descent.

So has never revealed his family and siblings’ details except he comes from a Chinese family.

Regarding his education, Shaun studied at the University of Chicago in the year 1999. He earned his BA degree in political science in the year 2003.

Also, the veteran has taken language immersion classes and studied Mandarin at the Tsinghua University. He received his MBA degree from the City University of New York.

The great veteran has worked as an intelligence analyst for the United States of Defense from June 2003 to April 2006. Later he joined as a defense contractor for McNeil Technologies. There So worked from July 2006 to March 2009.

Additionally, Shaun also contributed to the United States Army as a counterintelligence special agent. The great personality led the team for domestic and international battle operations. He also presented as a tactical team sergeant.

Meanwhile, Shaun is the co-founder of an urban logistics start-up named Cubby and worked as the CEO of the company from June 2011 to April 2012.

So realized his wife had to take several bags with her for work and had a hard time managing the luggage. Therefore, he created the idea of launching the pop-up store naming it an “urban personal logistic company”.

He also worked as a Forbes contributor from May 2012 to December 2014. During his contract with the American business magazine, he released several articles on different subjects such as entrepreneurship, veterans, and business.

Presently, So is the CEO as well as managing partner of The So Company.

Shaun So- Net worth, Salary

The hard-working Shaun has earned a decent income from multiple professions. He has worked as military personnel. Furthermore, he has served in different organizations in different positions.

From his profession, it is estimated that So has a net worth of nearly $1 million.

Furthermore, he has not publicized his exact salary, earnings, and assets details.

The 41 years old businessman has never been part of any rumors or controversies till now.

It seems that Shaun prefers to enjoy his personal life and does not want to become any social media or public’s controversial topic.

The former military personality has a muscular body structure. Shaun stands tall with a height of 5 feet 7 inches. Also, he has a balanced bodyweight with strong arms and muscles.

Furthermore, ha has a black eye as well as black hair color.

Nonetheless, So has never mentioned his exact body weight and other physical details till now.

About his social media presence, Shaun So is not an active personality on social media. Till now, he has not any official accounts of Instagram, Facebook, and Twitter as well.

It seems that the veteran is not a social media lover and prefers to enjoy his personal life.